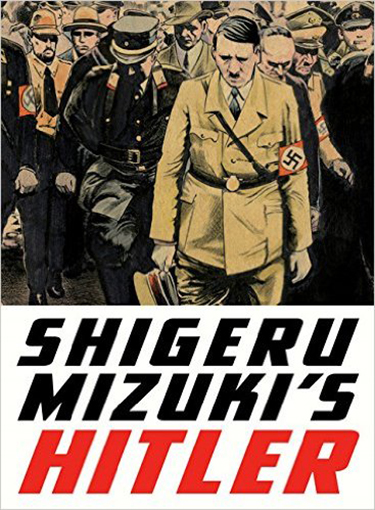 Hitler
Shigeru Mizuki, 296 pgs, drawnandquarterly.com, $29.95Propaganda and willfully blind obedience are weapons of mass destruction. Such is Hitler’s legacy. Shigeru Mizuki’s Hitler shows how swiftly and completely everyone around the notorious Nazi dictator gave in to his lies and wishes.

It is worth noting the extent to which Germany was a beaten and humiliated nation after World War I. The Treaty of Versailles had imposed outrageous reparations, followed by a Great Depression. It is in this social and economic desperation that Hitler, a vagrant and an artistic reject, comes to thrive. His delusions of grandeur, his dreams of German supremacy, and his belief in conspiracies, especially the Jewish one, are clearly vocalized from the beginning of his story.

Mizuki portrays Hitler as a lethal blend of obsessiveness, persuasiveness and political intelligence. He is determined to create his 1000-year New Order, a dream of empire. And everyone is persuaded that divine providence is to lead him to victory.

The book begins with scenes of resistance, people hiding in houses, rebels planning in secret, knowing that, if caught, their fate is the concentration camps. Interestingly, after this brief exposure within the plot, there is only one further mention of the Holocaust near the end. Though it is an integral part of this narrative, its details are put aside in order to focus on the life-course of Hitler, for his rise to power is nevertheless a captivating one.

Mizuki cleverly sequences conversations and scenes, and one is rarely left uninterested, as one witnesses the persistent machinations unfold to support Hitler’s rise and then give way to his eventual downfall. Landscapes and action frames are skillfully balanced in rhythm and texture, while the entire book is accentuated with stunning full-page and two-page spreads of stylized and sometimes satirical portraits. There are detailed notes on many persons and events, making this book an excellent introduction to the dictator’s life story. Mizuki’s Hitler is both an artistic masterwork and required history reading. (Marc Tremblay)