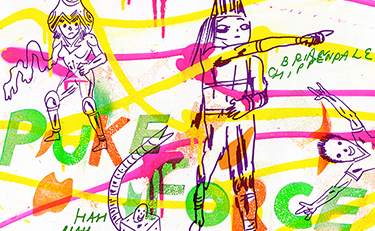 As far as punk oddities go, Brian Chippendale may have the competition beat with Puke Force. This antagonistic book skewers present-day life in a series of one-page comic strips which chronologically build on each other (although with that being said, the entire structure is characteristically frantic).

Chippendale has created a world equipped with a dystopian veneer, laden with exaggerated symbols of things that may infest our current society (example: dependence on a perfected social media presence is symbolized in ghouls that uncontrollably spew phrases like “#yolo.”)

Although Puke Force’s barely-underlying critical social commentary is very apparent, Chippendale occasionally still manages to be very funny in these strips. Of course, it begs to be mentioned that a very certain special kind of weirdo will laugh out loud at scenes such as when a pantless humanoid ejaculates on someone’s laptop and then blames it on a robot. (Fortunately, I am that special kind of weirdo). This book is something that absolutely cannot be recommended for everyone, but those who revel in the idea of reading material that feels vomited-onto-the-page should pick this up and get messy as soon as possible.

While my eyes went cross-eyed at the meticulously detailed yet grossly crude drawings, I also got a sense that there was an intentional accessibility here, which will hopefully inspire those with similar aesthetics to make their own comics series. Let the creative, angry sparks fly! (Richelle Charkot)