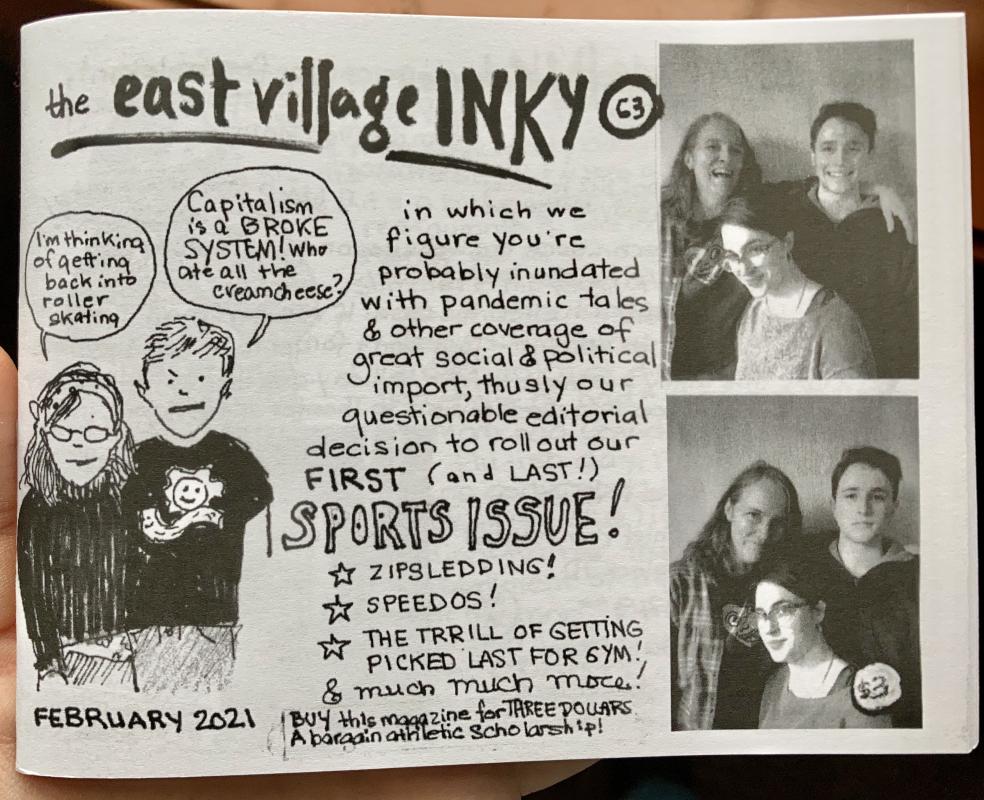 Zines are artifacts of the period in which they were published. With the proliferation of design and editing software, zinesters of 2021 have access to digital tools that didn’t exist in the year The East Village Inky began, and all but the most hardcore or nostalgic use a scanner or editing software in some way. EVI, for better or for worse, is one such hold out, written and illustrated almost entirely by hand. It’s a grayscale, analog creation hewn out of Ayun Halliday’s obviously long-held passion for zines.

As a perzine, the contents are Halliday-on-Halliday: the author describes an event in her life or a memory from her childhood that was impactful in some way, and extracts how that event or memory has shaped her since. This zine is a long-running serial (also far less common in today’s scene, which tends toward one-offs), but she tries to keep it fresh. “Rather than regale you w/ a 2nd installment of life-on-pause, however historic, I thought I’d take it in a direction I really know nothing about: sports,” she writes in the introductory piece. Halliday goes on to detail her experiences of being picked last “or almost-last” during gym class, how she f’d her knee forever trying to be athletic, and a solid selection of sports movies she recaps with irreverence. Interspersed throughout the sports stories are glimpses into Halliday’s life: she has two kids who she homeschools, a cat, and a home in New York City.

As I mentioned, this is an old-school perzine. Many of the pages are solid text, something which requires a high tolerance for hand cramps on the part of the zinester. Whereas hand letterers of the past have often opted to write in all capital letters, Halliday’s stylistic choice of using lowercase letters make the pages difficult to navigate at times. For anyone who writes out zines by hand, I’d argue that for tight blocks of text, using capital letters makes your end product easier to read and navigate because there will be no over-hanging letters.

Anyway, EVI #63 was an enjoyable read, and 63 issues and counting is nothing to sneeze at.