Art holes is a column where creators diagram their work spaces. This issue, Sybil Lamb gives us a look into her busy hidden attic in southwestern Ontario 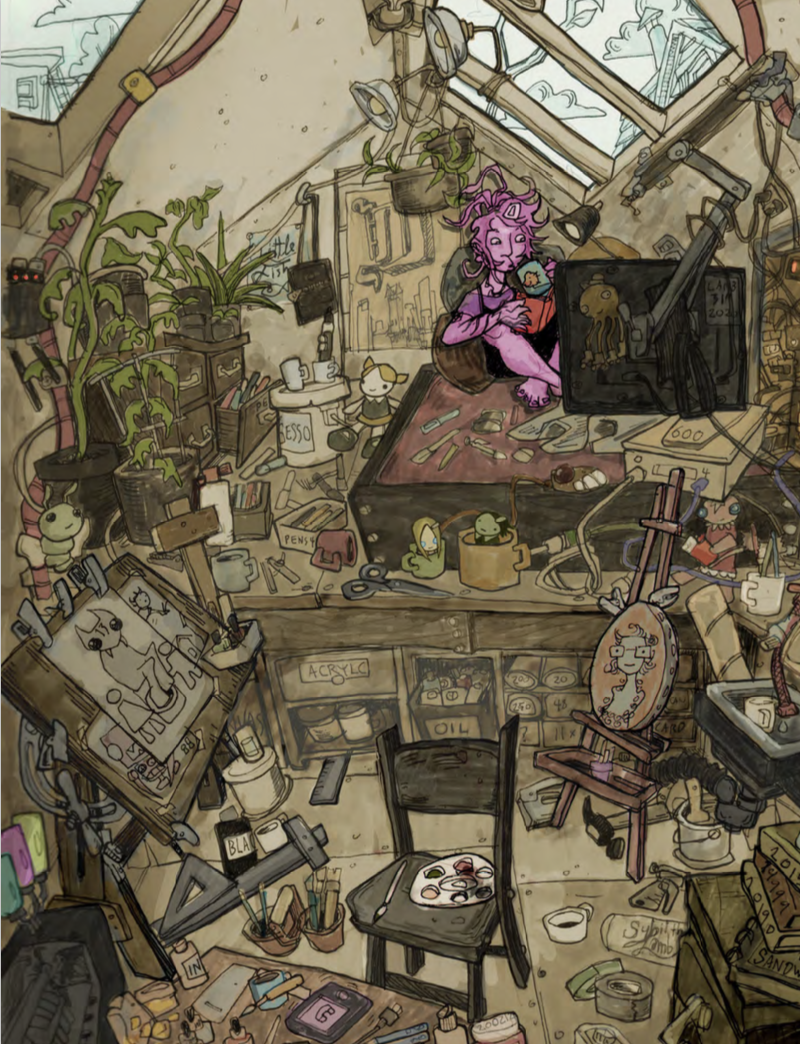 Around the time Toronto started dying for real (just after World Pride in 2014), I had one of the last affordable artist lofts in Toronto. By affordable, I mean like $1,234 a month, and turns out I was actually paying more than any of the other, older tenants in the building. The place was right on top of a 50-year-old dirtbags-’n’-hockey-players gay piano bar, full of loud, loud 50-year-old OG drag queens and complete with an unlit, grimy beats stainless steel dance floor in the back. The ever popular Tuesday Dyke Fight Night had to get shut down because they’d fight in front of the bar, spilling out onto the street and blocking traffic, so they replaced it with meth and line dancing night.

The point is that Casey Plett, the famous, award-winning writer moved in with me at that place, because by that time it was literally the singular, absolutely last remaining affordable cool artist loft in the city, and she needed one. Then I got my relocation settlement cheque, and I knew I had my only chance. Time to make a break for it and finally begin living in a 53-foot- long steel storage container located 70 km away from a grocery store in Moose Knuckle, New Brunswick. Casey, for her part, wanted to buy a farm north of Winterpeg.

So, we decided to move to Old Sandwich Town, Ontario, which looked to be equidistant.

Sandwich Town is perfect. About 34% of its population is Muslim, it was the freedom station of the Underground Railroad, and Sandwich Baptist Church, completed in 1851, is five doors down from me. We also have House of Dominion, a 145-year-old punk, metal and darts bar. Abraham Lincoln got stranded here once, and as a result invented the riverboat that won’t run aground in Canada. Prohibition ended in Canada because a crazy preacher once shot up the Sandwich roadhouse, which somehow resulted in the conclusion that we should legalize alcohol in order to avoid gun violence.

One day, when I had already lived for half a year in a 9-foot by 11-foot by 11 foot pillow fort of a room, I popped in my ceiling to see if I could fit a few boxes up there. Lo and behold, I had a 40-foot long triangle standing 6’2” down the middle. An attic! So, if anybody wondered why my work has shifted from big paintings to little comic books recently, know that I’ve been living in a nest of 4ml plastic, insulation and a changing cast of spiders for a few years now.

I’ve been slowly tinkering away at it. I’ve put windows and skylights everywhere (mostly re-purposed from a nearby apartment building renovation) and replaced the non-floor with old packing crates and plywood. There’s like 20 working outlets in here, the wifi is next to my bed, and I have hook ups to do a bathroom eventually, but I gotta save up to get a gable first. Shown in this drawing is all my art gear from working on painting and illustration stuff. And then, as usual, I’m at the other end in bed at the computer, but not paying attention.

The moral of the story is that living in tiny cramped spaces is awesome if you yourself are a tiny, spacey cramp. Oh and windows and plants make you mentally healthy, get as many of both as possible.

Sybil Lamb
While best known for everyone having thought that her berzerker punk memoir I’ve Got a Time Bomb was the best gonzo sci-fi of 2014, Sybil Lamb also wrote and illustrated a “kid’s book,” The Girl Who was Convinced Beyond All Reason That She Could Fly. She takes every illustration job she can get and has put her art on everything from a cider bottle to album covers, a steampunk Children of Mars role-playing game, and some serious journals of psychology and literature. She is even slowly hand painting each card of a 96-card tarot deck. Her driving passion is the post-apocalyptic best frenemies adventures in her webcomic The Lost Little Girl Show In the Year 19999. She lives in an enormous and tiny cramped attic hideout in Sandwich Town, Ontario. See tons of Lamby art at sybillamb.com
Subscribe Today