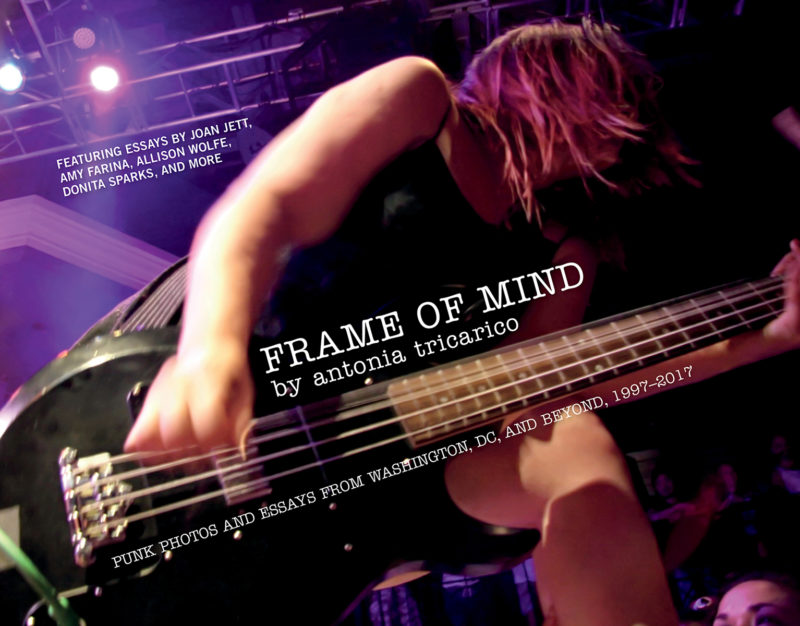 So often music history, like most histories, is told from a man’s perspective. Which makes Antonia Tricarico’s Frame of Mind such a refreshing documentation of punk music. Part photo essay — with pictures by Tricario of the Washington D.C. scene through 1997-2017 — part written excerpts, Tricarico made the conscious decision to show photos from all areas of the music scene, while only featuring the writing of female musicians.

This decision turns the book, whether intentionally or not, into a celebration of women and sisterhood, with musicians from Joan Jet to Donita Sparks of L7, and many more, all sharing the trials and tribulations of being a woman in music, while also giving a historical record of Washington DC. It is moments like this quote from Alice Bag (from The Bags, Fun House and other bands) where she describes diving into rock music as a teenager that sums up the female empowerment of the book, “Not only was I still a virgin, but I quickly got bored trying to feed the hungry egos of male musicians. I realized that I didn’t want to cater to the rock star, I wanted to be the rock star.”

As mentioned, this is also part photo documentation from the era with photos of The Make-Ups, Fugazi, Patti Smith, The Ex, The Gossip and others with both behind the scenes and on stage action shots that encapsulate a time in music history in a city that has so much to offer.

This is a great read for any interested in music history and a needed read for young women who need a bit of encouragement to pick up a guitar.