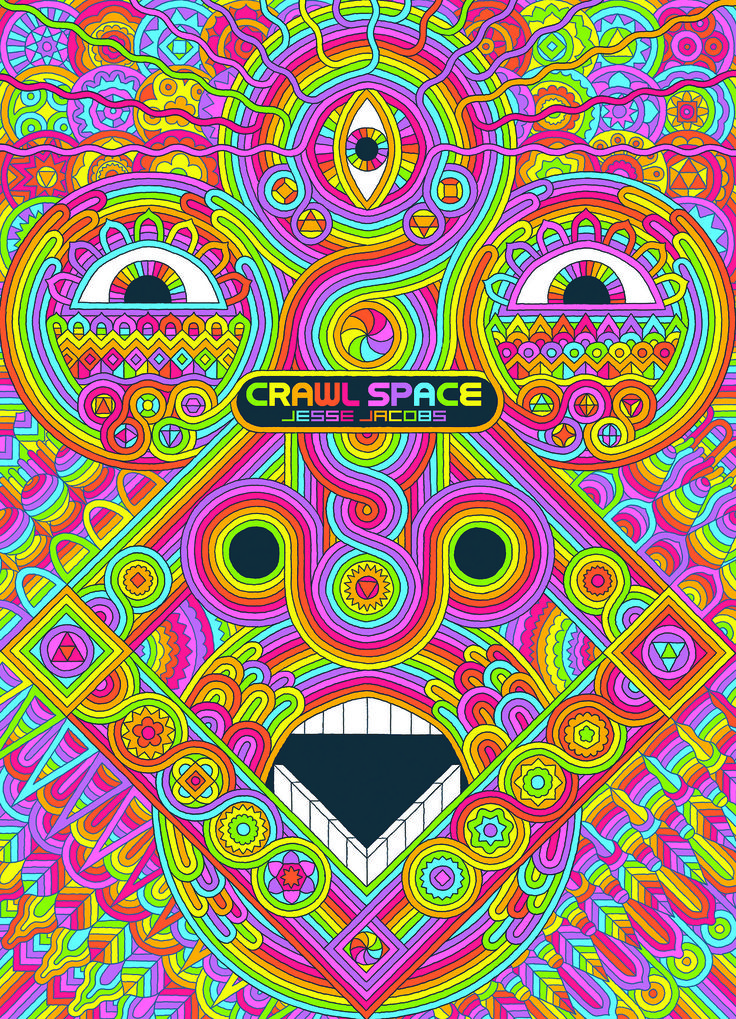 For Jesse Jacobs’ third book with Koyama Press, the path to transcendence begins in the basement laundry room of a suburban home. In Crawl Space, two middle school-aged girls discover a portal leading from their drab black-and-white neighbourhood to a vivid otherworld, best described as a petting zoo on Mario Kart’s Rainbow Road course. This otherworld, said to be a “higher plane” of reality, is typically only accessible to the spiritually enlightened, but a Narnia-like shortcut in their washer-dryer exposes it to interlopers. Before long, their intrusion begins to trigger dark changes in its peaceful ecosystem.

Crawl Space is thematically of-a-piece with Jacobs’ previous graphic novels. He likes to juxtapose the small-minded destructiveness of humanity with the inscrutable plotting of cosmic entities — the closest figures to true gods in his comics are the least human and represented as ever-shifting patterns of matter and colour; divinity seems to rest on shedding individual identity. By This Shall You Know Him, Safari Honeymoon and now Crawl Space are each stories of Edens squandered by human consumption, and the way nature strikes back. They’re paradise-lost narratives for the climate change era, albeit leavened by whimsy and body humour. Jacobs’ squishy, deformed figure work teeters between cute and creepy, the uncanny and harmless Treasure Trolls and humanoid teapots that inhabit the otherworld giving way to fanged monstrosities.

Jacobs’ projects each employ distinct visual restraints. In the past, he’s limited his palette to two or three colours per book, but in Crawl Space he works with nine (plus black and white). Yet, he refrains from variation in tint, hue or shade. It’s as though the transition to the otherworld splits the traveller’s perception of reality into its composite elements, like light through a prism. One character’s instructions for navigating this experience could double as Jacobs’ process: “Collect a wide variety of […] shapes. […] Distribute the pigments proportionately. Arrange them in order of where they belong on the colour spectrum. Assemble the pieces into complex structures. Allow yourself to dissolve into the patterns.” The result is another visually arresting book from one of Canada’s most distinctive cartoonists. (JM Francheteau)