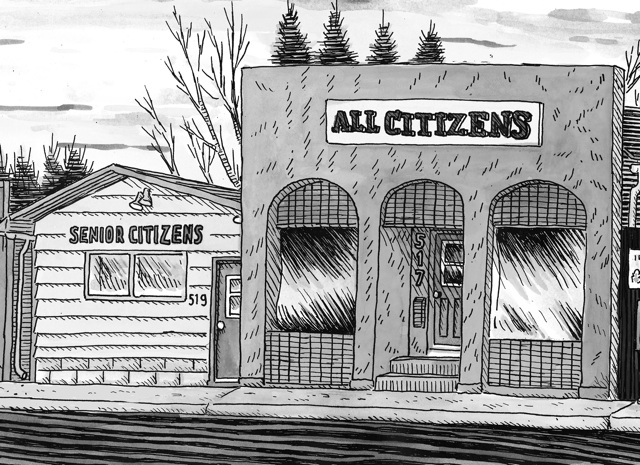 In 2006 Serena McCarroll and her partner, Tyler Brett, moved from Vancouver to rural Saskatchewan with dreams of cheap property and self-employment. All Citizens (Conundrum Press) tells the story of their journey.  McCarroll is an artist currently living in Toronto. She received a BFA from the Emily Carr Institute of Art in 2002 and a MFA from Ryerson University in 2011. For more information and to buy this beautiful book, go here.

When we moved here there were two things that stood in the way of us staying: finding work and finding a place to live. Pretty essential stuff and it has not come easily…
I’m currently on Employment Insurance and received a nasty call from a government employee three weeks after we got here. We were dealing with the horror that is our septic pump and hadn’t determined if we could actually stay, and if we did stay where we would live and thus where we would look for work. The fellow who called me was not impressed and made me feel like we had made a mistake moving here.

We decided to look for work in and around Humboldt and hope that we could also find a home in the same area. We both have B.F.A. degrees, which are worthless as far as gainful employment is concerned (a situation that wasn’t much better in Vancouver). We also only have one vehicle and Tyler is the only one who knows how to drive. This means we must find work with similar hours in the same location. Not easy. We first tried a beekeeper’s, which was not nearly as romantic as it sounds. Next, we both applied to a company that manufactures highway trailers. It took us almost an hour to drive to the factory location. We were pretty much out of gas when we arrived and there wasn’t a gas station in sight. We were both taken on separate tours. The factory was huge and noisy and one of the first things I noticed was a sign that read “28 days since the last accident”. I was told I would be working in the metal fabrication department. Upon inspection all I saw were burly men stationed at huge frightening machines that would “take your finger right off.”

After the tour I had to complete a test and do an interview. During the interview I was told that they were concerned that the heavy lifting involved in metal fabrication might be too challenging for me and that the paint department might be better. “You aren’t sensitive to toxins are you?” Hell no, I love toxins! Tyler went through the same routine as I did in a separate room.
He was told he would be placed in the finishing department, which included tasks like putting on decals and mud flaps. It appeared to be the most laid back department in the factory. I was jealous.

I left determined to find another solution (oh, and we made it to a gas station two towns away). And that solution was…self employment! Yeah, that’s it! Tyler and I had noticed a storefront for sale on Main Street in Bruno. We had a look inside, the building includes living quarters behind the store, all of it on the market for $6,500. We’re currently looking into buying it and I have been accepted into a Self Employment Program through Employment Insurance. This was NOT what we were expecting… we wanted to live in the country. However Bruno is a pleasant little town and if all goes well we can move to the country later on. What business am I going to employ myself in? Stay tuned. Tyler accepted the factory job and he actually doesn’t mind it, except he has to get up at 4:00 am in order to get there on time (they also offered him a job in the paint dept. for a higher wage but he turned it down, as the finishing dept. is definitely a better place to work in). So that’s that. (July 22, 2006) 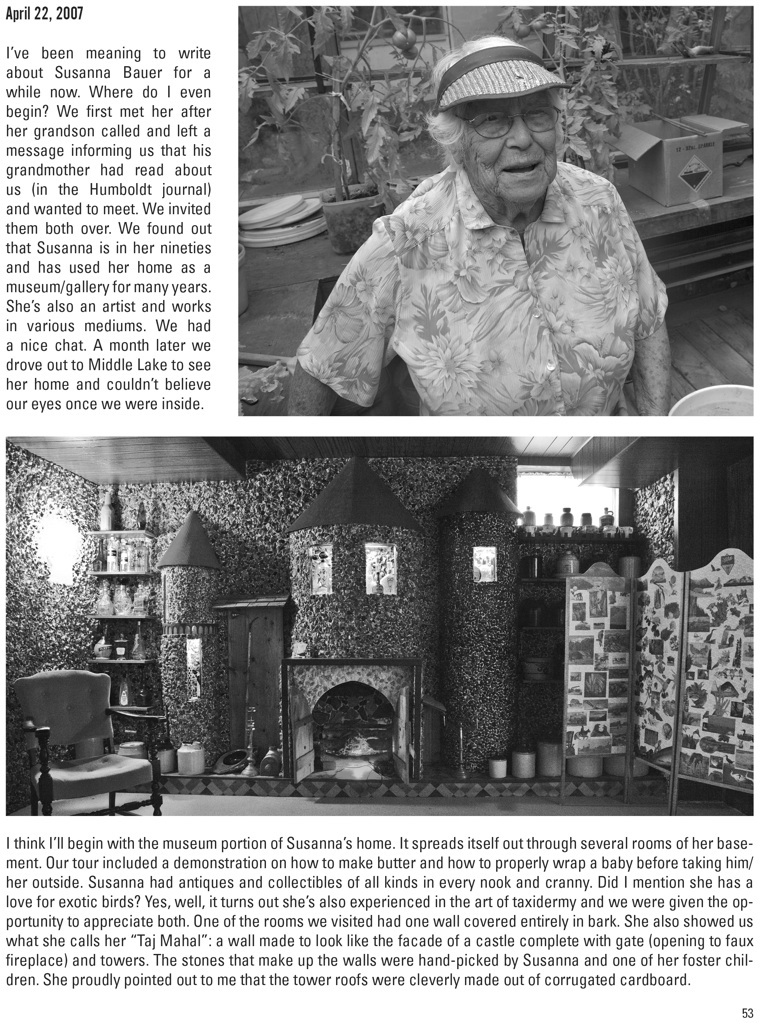 Last week when Tyler was driving home from his late shift at work he came very close to running over an extremely mysterious animal walking across the road. He described it as a longhaired ape/dog that moved like a sloth. He swerved to avoid it, it freaked him right out! When he asked his co-workers about it the next day the consensus was that he saw a wolverine. Apparently one has
been spotted out here but sightings are quite rare. (August 6, 2006)