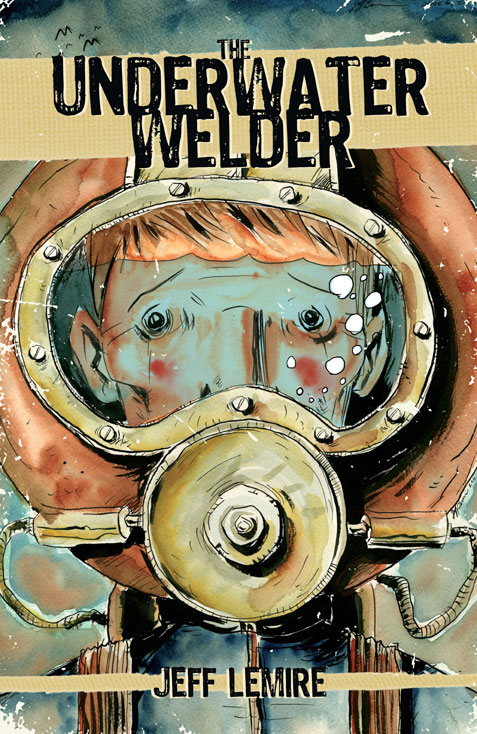 The new graphic novel by award- winning author Jeff Lemire (Essex County, The Nobody) is a haunting and artfully-drawn story about a man who must face the memory of his father’s death before becoming a father himself. Our hero Jack has arrived in Tigg’s Bay, Nova Scotia and after getting a degree in English he’s working as an underwater welder because it’s “kinda hard to raise a family off an English degree.” His wife Susie is pregnant and there’s a mystery afoot as Halloween and the birth approach. Jack’s dad, a salvage diver, exists as a ghost whose mysterious disappearance weighs heavily upon the family. At age 33, Jack has memories and wants to dredge them up — for, as his father says, “your future is waiting for you down there, it’s just a matter of time until we find it.” As Jack delves deeper and deeper into his search, he creates a tension with Susie, who asks if he’s simply turning into his father — drinking and diving? The brilliance of this story comes through the layers of metaphor for diving, dreaming and the subconscious. Jack connects to these memories like many of us do, through ritual — a nicked chin while shaving, a drop of blood in the water. Jack’s dives into memory are also augmented literally by his work as a welder. Lemire draws Jack’s diving and dreaming sequences in beautifully rendered ink on paper, contrasting with the woodcut-like images and line- drawn dialogue scenes. These diving/dreaming sequences include a few clever blacked-out pages while Jack is unconscious or sleeping — with Lemire using the water as a Jungian stand-in for the subconscious, allowing these two worlds to merge. It is these haunting images of his past, clues both material and ephemeral, that drive the narrative. The story is told in an effective cinematic style. We see and read the story in a range of angles, from the intimate — a hand adjusting a knob on the radio or lighting a cigarette — to masterful landscapes, like a bird’s-eye view of the streets. Lemire structures his panels brilliantly, varying sizes throughout. An especially creative technique is Lemire’s use of multiple panels for a single, shattered image. Through these poetic images, we are drawn into a story that is both startlingly human and filled with threads of magical-realism. This combination makes Jack’s nostalgia and the emotional arc truly touching and heartfelt. This is a beautiful and haunting story. A must read. (Nick Hutcheson)