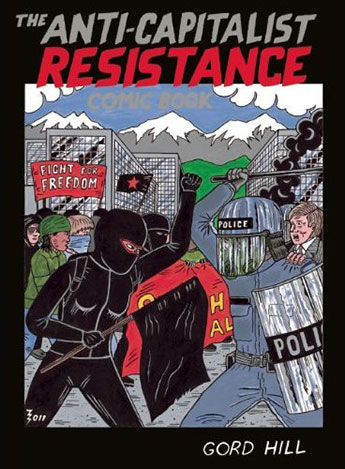 Of all the surprising moments of the Occupy movement, the one that warmed the cockles of my heart was the marathon reading of Melville’s short story “Bartleby the Scrivener: A Story of Wall Street.” It is a story of passive and insidious resistance to capitalism and false charity, encapsulated by the enigmatic copyist’s repeated refrain when asked by his boss to explain himself: “I prefer not to.”This act of preferring not to has been deftly captured by Gord Hill in The Anti-Capitalist Resistance Comic Book, along with counter-histories of the 1999 “Battle of Seattle,” and the G20 Summit in Toronto in 2010. This intricately illustrated political graphic novel provides its readers with a much-needed alternative perspective on the history  and rise of capitalism and the rippling effects of globalization and escalating class warfare. Illustrated in black and white, Hill’s attention to detail and use of stark contrasting figures quickens the incendiary pulse of the comic book. Riot police and faceless RCMP brigades are rendered like automatons and partnered with onomatopoeic words like “SCREECH!” “POW!” and “BOOM!” which brings levity to the otherwise weighty subject matter. And thankfully, for those of us whose editions of Das Kapital are collecting dust, Hill offers a crash-course prologue with “A Brief  History of Capitalism,” which traces economies in the earliest city-states to the inauguration of NAFTA and the growth of neo-liberalism. With a forward from Allan Antliff and an introduction by Dave Cunningham — both of which address the societal rupturing that is intrinsic to incendiary forms of mass protest and resistance — Hill has crafted an important commentary on capitalism, activism, and solidarity. The final image is of a silhouetted protester waving an Occupy flag before a wall of police shields with the captions reading: “With economic conditions continuing to decline…anti-capitalist resistance can only increase.” It is a stoic rallying cry that should rouse the Bartleby within. (Julia Cooper)