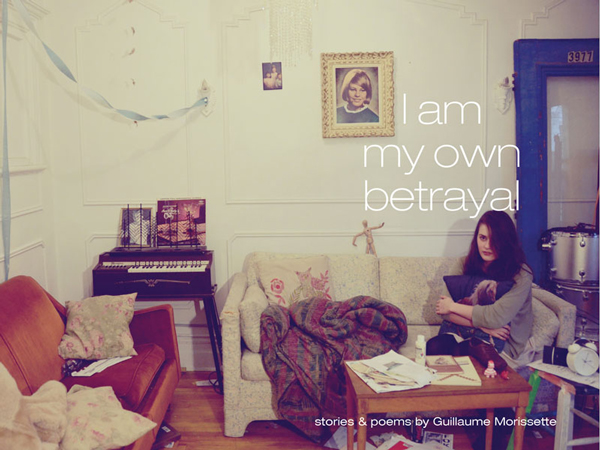 The front cover of this book shows a twenty-something-year-old girl alone in a room, clutching a pillow. This, along with the collection’s title, sets the tone for what’s inside — loneliness, self-deprecation, mistakes, and the occasional cameo from a house cat. Although this may not sound like the premise for an incredibly unique bounty of writing, I Am My Own Betrayal’s take on misery is shockingly accurate, and its well-evolved definitions of personal relationships feel horribly true.

The storylines in this collection of short stories and poems revolve around young people in Montreal, often following break-ups, and often accompanied by beer. “Vaster Emptiness Achieves” kicks off the book following a relationship that builds over an email chain with the subject line: “The mistake thread of probably intense self- loathing.” The sentences are sometimes fragments, and punctuation may be left out here or there. Full-fledged depression has de-motivated proper grammar. Morissette’s poems have less structure, but they’re full of catchy epigrams, and mentions of Facebook that miraculously don’t feel like cheap pop references.

And although not on a radical scale, there is variety and experimentation in this book. For instance, “Karpa Drama Triangle” shows four people in bed together after a night getting drunk. The narration runs through each character separately, describing how they each ended up in the sack with three other people. It’s an appealing and revealing method of exploration.

Morissette’s collection doesn’t veer far from the topic of sadness, but it’s a niche that he handles with empathy and skill. As readers, it will make us dwell on our shortcomings till we’re all desperate for a pillow to hold on to. (Colin Brush)