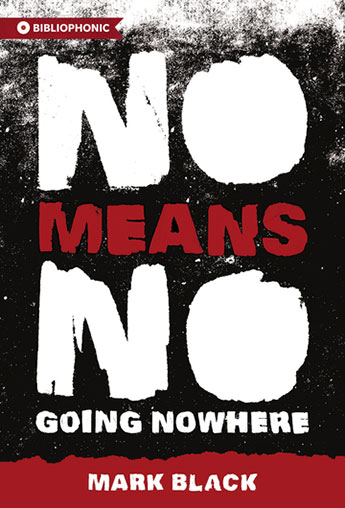 Mark Black admits early on in his new book that he was a latecomer to NoMeansNo fandom, blaming an overwhelming back catalogue of albums, lengthy songs full of distinctly unpunk rhythms, and a teenager’s flimsy attention span for keeping him away. But it’s clear the veteran Victoria progressive punk outfit has come to mean something very important to Black, and Going Nowhere is less a biography than a long conversation on how that happens and how after a lifetime of listening, we suddenly realize that we’ve come to love a band. If you’re looking for a chronology of NoMeansNo’s long career, or a discography of their many albums and side projects, the book may seem to meander, jumping back and forth between long interview passages and personal reflections. The author’s enthusiasm is constantly boiling over and infectious, and Black stuffs as many anecdotes and details into a slim 93 pages as he can, allowing himself to be sidetracked into a perhaps overly long vindication of the band’s Ramones- worshipping side project, the Hanson Brothers, and a few pages on the science of predicting punk band names But if the book occasionally seems unbalanced, it’s also refreshingly devoid of punk clichés or stories of mayhem; it’s an appropriately even-handed portrayal of a band of talented, normal, ego-free guys. The most sordid tour story they have revolves around a homemade game of Jeopardy. Going Nowhere’s best moment may be when Black draws a connection between the working relationship of NoMeansNo’s Wright brothers (who are eight years apart in age but have worked and played together for over two decades) and his own early bonding moments with his brother when discovering the band. For both sets of siblings, NoMeansNo’s weird, angry music brought them closer together in ways they couldn’t have predicted, and that’s where this books leaves the strongest impression. (Tom Buchanan)