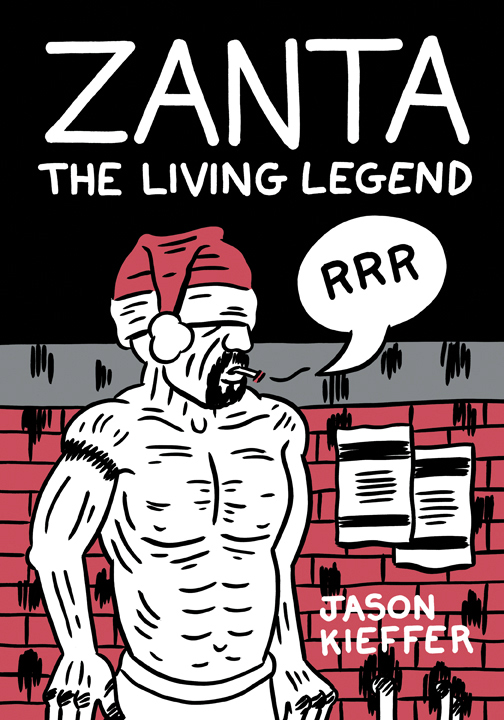 Jason Kieffer follows up his controversial overview of Toronto street people, The Rabble of Downtown Toronto, on a similar note, this time turning his focus to the story of David Zancai, aka Zanta. From 2003 to 2007, Zanta was a public fixture in Toronto, known for his Santa hat, his pushup-honed physique and his motor-mouthed recitations of “Yesyesyesyesyes!!!” Viewing himself as an entertainer, Zanta was an imposing, yet largely harmless eccentric, but as many of these stories go, not everybody saw him this way. By 2007 he was deemed a public nuisance and pretty much banned from the downtown core and subway lines. Kieffer’s graphic novel tells the story of Zanta in five parts. The first covers an interview he conducted with Zanta on the street in 2006. While taking a lengthy walk, Zanta tells his tale while constantly stopping to do push-ups on newspaper boxes and engaging people in his customary upfront way. The second part is a transcript of a radio interview conducted while he was holed up in the Don Jail in early 2007. Part three is a pretty off-the-wall “origin” story of the actual character of Zanta. This is followed by a section of “man on the street” style testimonials that show a varied opinion on the man and how he was perceived around town. The last section involves supplementary information such as timelines and maps. Regardless of the accusations of insensitivity and indifference Kieffer received surrounding Rabble, it’s obvious that he’s truly interested in Zanta’s story and sympathetic to his mistreatment by authorities. He’s treated as a real person — definitely an odd one — but Kieffer doesn’t mock him or treat him as though he’s part of an urban freakshow. Zanta was a one-of- a-kind character that makes the weirdness of city living much more interesting and Kieffer should be commended for bringing his story to a larger audience outside of Toronto. (Matthew Daley)