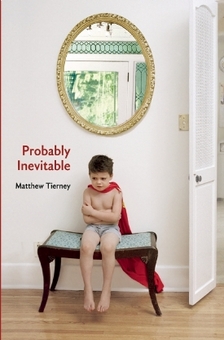 In Matthew Tierney’s third poetry collection, mundane situations are elevated by meditations on space, time, art and culture – and of course, fantastic titles: the tediousness of jury duty (“Regular Folks Going Bananas”), attending a wedding you’re less than enthusiastic about (“Carbon Monoxide, Alka Seltzer and the Slow Pitch of Acceptance”), or painting the kitchen with Jackson Pollock on the brain (“Primed for Contact”).

These poems are energetic, jazzy, and laced with internal rhymes. They’re smart and frequently roam into unexpected territory. In “From the Outside In,” Tierney muses on death and aging, contrasting the formation of Earth with a Plank interval “so vapour-thin there’s no before or after.” Life – all life – and death, is reduced to a series of moments, ultimately inconsequential.

Tierney was a science major before switching to English, and both disciplines are on full display. Physics references collide against allusions to Nabokov and Murakami with spectacular results. Yet at times I sympathize with the protagonist in “Paleosubwoofer,”: “That ache between the shoulder blades / as though my Barbie box were yanked: / ‘Math is hard.’…”  Thank goodness for Wikipedia.

Though some of the references are over my head, these poems are fun to read aloud. Try reading “Speed Dating in the Milky Way” in a Beat rhythm, finger snapping: “Mean solar age and gravitational weight / say I’ve sustained my heart’s optimum rate / across the eight-minute tickertape – roughly when / this twilight departed the sun.” It’s infectious. (Nico Mara-McKay)