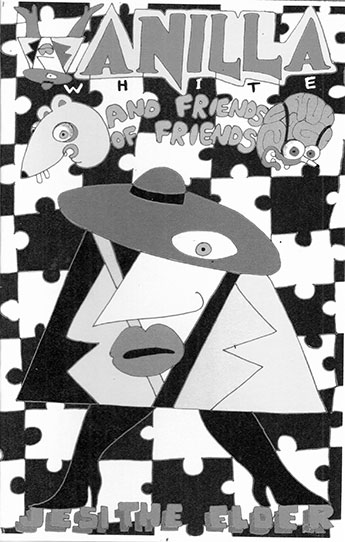 I’m dating myself here, but growing up in the ’80s I used to read my friend Daniel’s Mad magazines. We both agreed that apart from the fold-in, our favourite feature was Spy vs. Spy, the comic about the two pointy-headed men that blow each other up. Vanilla White and Friends of Friends reminds me of Spy vs. Spy, not just for its big, floppy-hat-wearing hero, but also for the gonzo pacing and sudden destruction that populates its pages. I wonder if it was an influence for Jesi.

This comic does not waste time getting to the crazy. Vanilla White is a secret agent who almost runs over a dog. There’s a secret passcode and then this alternate world full of pus and whiteheads and acne-covered musical notes. Then, after the maze, they’re in outer space where there’s the floating head and the giant cigarette. People melt and the world breaks into a million pixels.

To be totally honest I couldn’t tell what was going on half the time. It’s not because it was badly drawn but because it was just too far out. Jesi has created a weird and funny world of mutants that melt into piles of slop, worlds that break apart, and where even the most intrepid hero could pocket dial their mortal enemy by accident. The colourful cover looks really cool. If you happen to be a fan of alternative, oddball comics, then this might be up your alley. (Chris Landry)