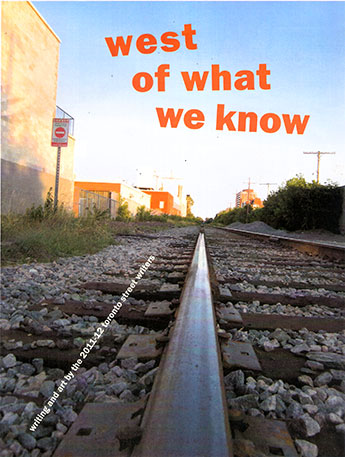 When reading an anthology of new writers, one often sees how exhilarating it can be to experience the raw inspiration of young creators driven to just express something as they develop their craft.

West of What We Know is an anthology of literary and visual works produced by the Toronto Street Writers, a group for authors and creatives aged 16 to 29. To borrow a phrase from rapper poet Grimace’s “Lost Tribesmen,” the works included here showcase authors who are “Mapquesting the four directions” — that is, writers who seek to expand their perceptions, make sense of their experiences, and discover their potential as writers and young adults.

Some highlights include the evocative front and back cover photographs by Danielle Thomas and John Nyman; Alice Gauntley’s poetic lament for students in “Potential”; an emotional tribute to a landmark of Toronto nightlife by Skittlez Gunn; Krystle McKenzie’s inspired recipe for domestic harmony and Rupi Natt’s poignant and telling bedside monologue, “St. Joseph’s Health Centre”.

These writers share their minds and lives with the reader, perhaps for the first time, and they express a wide range of intense emotions. Naturally, certain pieces are a little ragged around the edges but they are works in progress. It takes courage to share — and the determination to follow a rough idea through to its final, polished form is a prerequisite for all creatives.

Given the current economic climate, TSW’s existence is an achievement in itself, but the fact that it continues to

grow and support the development of young writers — and publish their work — is as important as it is impressive. (Shane Lange)