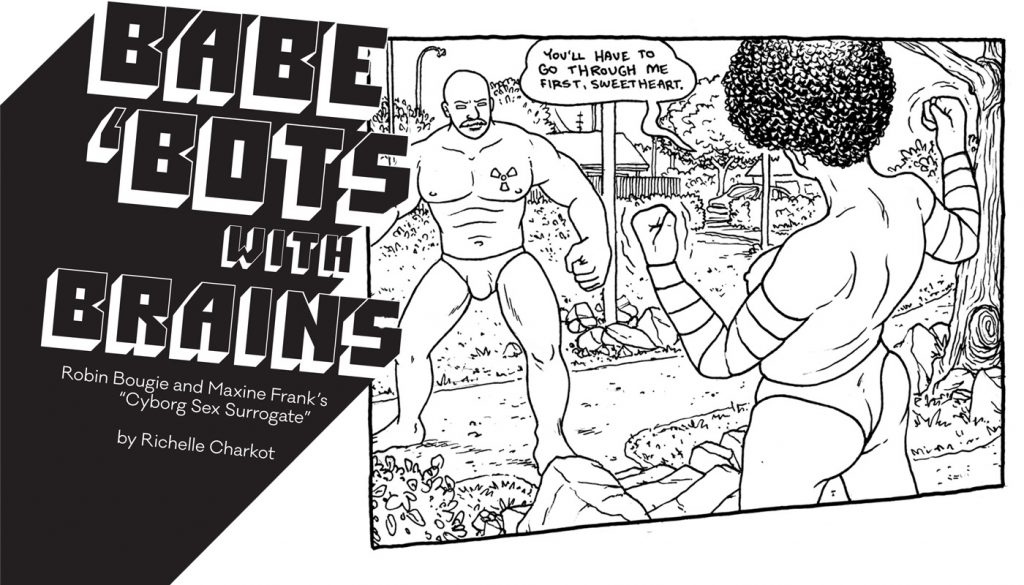 The female sex robot is a long-standing character device in genre narratives, for better or worse (and quite often, for worse.) From the perfect house-bots of the Stepford Wives to the oft-debated fantasy robot Ava from the 2014 film Ex Machina, the fembot trope is a hotly debated and ever-controversial aspect of science fiction, especially as the genre itself has grown to feature increasingly diverse, autonomous and intersectional characters.

Vancouver-based comics artists Robin Bougie and Maxine Frank aim to bring a different spin on the fembot narrative with their new porn comic Cyborg Sex Surrogate. After collaborating together for the past decade or so, most notably on their annual comic love letter to depravity, Sleazy Slice, the duo decided it was time to create the protagonist of their dreams. In Cyborg, Erica is an advanced female cyborg created to resemble a black woman, invented by a white scientist who fetishizes them. Unbeknowst to him, though, Erica is smarter and quickly learns about the history of patriarchy and white supremacy through the web. She ultimately grows to resent her creator, and separates from him to seek a more gratifying sexual relationship with another woman.

Frank was equally excited by the chance to create and explore Erica’s story, “We enjoyed the idea of a man creating what’s supposed to be his perfect woman, but then she eventually gets her own identity rather than just being an object for him,” she says. “Also, on a shallow(er) note, robots are cool.” 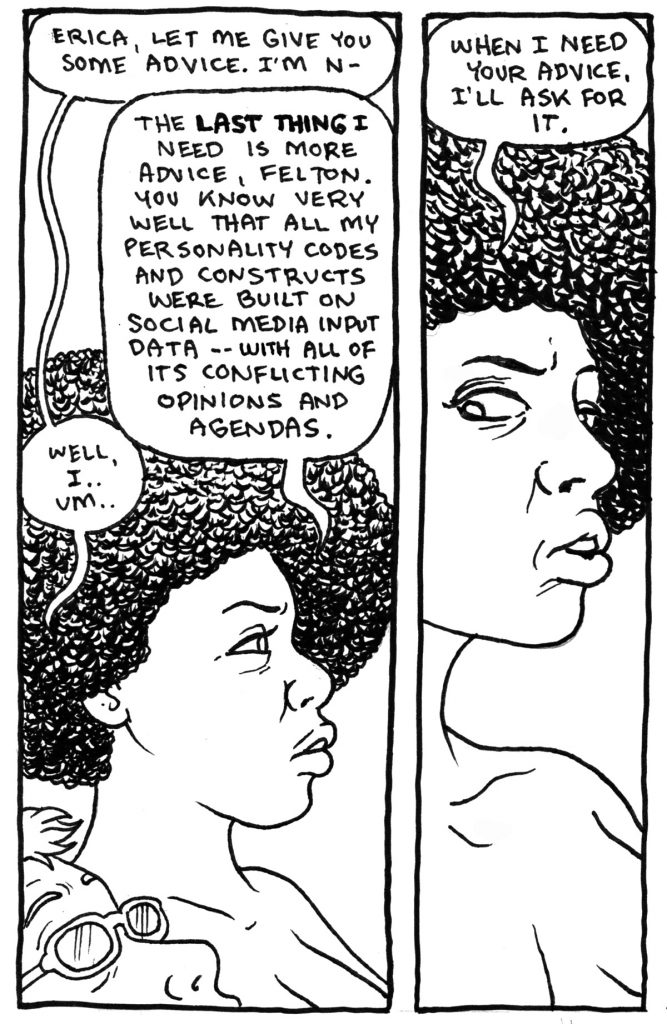 Frank and Bougie agree that their creation of a conscious cyborg, like many science fiction ideas, enabled them to incorporate and comment upon current affairs. “We’ve been thinking a lot about this stuff,” Bougie says. “The issues [that] black people have had this year, trans people, women, etc. It’s what a lot of people have been thinking about. What I personally want to do with a comic like this is make adult comics that have an equal amount of unapologetic and prurient sex and thoughtful and yet exploitational wrangling of modern social issues. And after mixing that awkward brew together, [you] just end up with something that is just genuinely fun and entertaining to read.”

After about a decade of work together, Bougie and Frank have mastered their creative process, sharing the drawing, inking and writing duties by handing the pages back and forth to each other. “(Frank) is also totally devoid of ego during the creative process, which is really the kind of person you want to work with,” he explains. “She has zero issue with me telling her that something isn’t quite right and needs to be redrawn, or letting me redraw it, and I reciprocate in that way, as well, because we both know we’re working in service of the comic itself.” Frank shares similar feelings towards the benefits of working with her long-time collaborator. “I first started drawing comics with Robin when I was around 19, so I was eager to take pointers and tips from someone who had been working on comics as long as he has. Now we each have our own things we’re stronger at, so will often help each other out if we get frustrated at a panel.”

“What we like is feeling exhilarated in a way that reminds us of being scared, but you’re able to walk away from it [horror movies] whenever you want. Pornography and exploitation also offers a very similar feeling, a sort of illicit thrill of ‘I shouldn’t be seeing this, but I am,’” Frank explains.

“It’s a funhouse mirror,” Bougie says. “Those genres of entertainment are a safe way to see the worst aspects of ourselves, of primal humanity, reflected back at us in a distorted and crazy manner. And if you can face those taboos, and laugh at them, and have fun with them and subvert them, you can actually demystify them. And once you do that, you can have all kinds of fun with it, if you’re brave enough.”