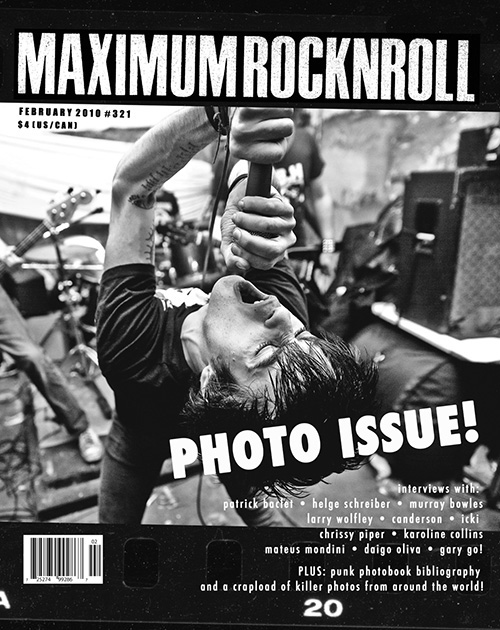 Maximum Rocknroll has been covering the international punk and hardcore underground for nearly 40 years. MRR was the brainchild of Tim Yohannan, an obsessive record collector from the San Francisco Bay area who embraced punk in its infancy and helped to bring punks all over the world together through his ambitious zine, sometimes called “the paper of record of punk”. Tim died in 1998 and left his massive record collection to the magazine.

We launched our archive project this year with the goal of creating a fully searchable and sortable catalog of our entire record collection by early 2017. Each record will be linked to the full text of its MRR review. We’re also digitizing our archive of radio tapes and the entire print run of the magazine. MRR volunteers have been discussing this project for over a decade and diligently keeping a database of the entire record collection. With the magazine in a solid financial position I was able to come on board as the archive coordinator in April 2016. My job entails checking the database against our holdings, the nitty gritty of digitizing every record review and radio show, and devising a publicly accessible online database—no small task. So far, over 100 volunteers—librarians, archivists, museum professionals, zinesters, punks, freaks, goths, engineers, developers—have helped in every capacity imaginable.

I think a lot about what we have, what we’re missing, and how that reflects the mission and history of MRR. Politics has always been central to MRR, and in the twenty-first century we’ve been staid and intentional about representing and centering the output and experiences of international punks and marginalized people in their own words (and sometimes their own languages). We’re made for punks, by punks—everything in the magazine is generated by submission, and we have no corporate money or influence whatsoever.

Every record in our collection comes in for review purposes, and if we don’t get it from the band or label, it’s unlikely we’ll have it. We try to track down what we’re missing with our small acquisitions budget, but it’s crucial that bands send their records in—they get reviewed and become a permanent part of the largest public collection of international punk and hardcore. The collection grows by about 100 records each month. Every record gets the same green tape around the edges, a tradition started by Tim to distinguish his records from his brother’s. Nowadays I think of it as the great equalizer—the tape is far from archival quality, but it greatly reduces a record’s value to a collector and gives each record a uniform look.

Tim was obsessed with vinyl—not CDs, not tapes, and definitely not digital downloads (which didn’t exist during his lifetime!). Our collection reflects that: we have over 49,000 records, but only 170 cassettes and not a single CD. We don’t review digital downloads, and I don’t think we ever will. MRR’s collection is staggering in volume and breadth: we have vinyl from over 100 countries, documenting a material history of punk that has included women, queers, people of color, punks from the global south, etc. from the very beginning—we have tapes and vinyl from the Philippines in the 1980s!

I often wonder about what we’re missing, what only lives on in the demo review section of the magazine, and how so much essential music exists only digitally or on Youtube or in the brains of a million teenage girls. Impediments to making and releasing punk music on vinyl are myriad, even with the introduction of easy digital recording and sites like Bandcamp. MRR can also be a victim of its own history. Tim Yohannan was outspoken, idealistic, and brash, and in his life he alienated many people and bands whose records and writings are central to a comprehensive history of punk but who wanted nothing to do with MRR. The MRR archive is thus really an institutional archive.

I’m really excited about the progress we’ve made so far. I’ve discovered countless records I’d never heard of which now number among my favorites, and I’ve talked to people and organizations whose DIY archive efforts blow my mind with their care and ambition. We still need all the help we can get—email [email protected] to get involved from the San Francisco Bay Area or anywhere else on earth.

Shivaun Watchorn is the Archive Coordinator at Maximum Rocknroll in San Francisco, where she is heading up a project to create an online database of the world’s largest public punk record collection. She worked at Extreme Noise Records in Minneapolis for eight years and has been a library and archives worker at the Minnesota Historical Society, Minnesota Public Radio, and the University of Minnesota.