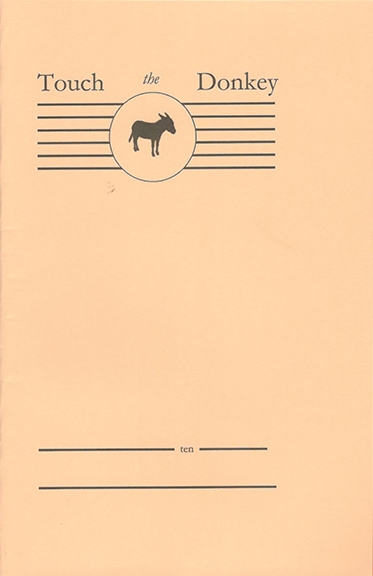 This tenth issue of Touch the Donkey — editor rob mclennan’s ongoing attempt to “engage with more experimental and avant-garde poetry” — presents a noticeably diverse group, both in substance and style.

The most rewarding entries in this collection come from Mathew Timmons. His first submission is two and a half pages of text that reads like the transcript of a yoga instructor’s motivational speeches. His second is a poem that finds innumerable ways to describe sundresses being shopped for online: “Detect those charismatic despicable sundresses online… Gravy those indomitable pitiful sundresses online.” Each line of this poem is capped with a curious four-digit code, which may conceal some deeper meaning, should you care to try and crack it, for example: “fRhC; Zlzk; xHmr.”

Though there’s no particular mood or theme that ties this issue’s poems together, they consistently find a satisfying balance between modernity and mystery. (Scott Bryson)