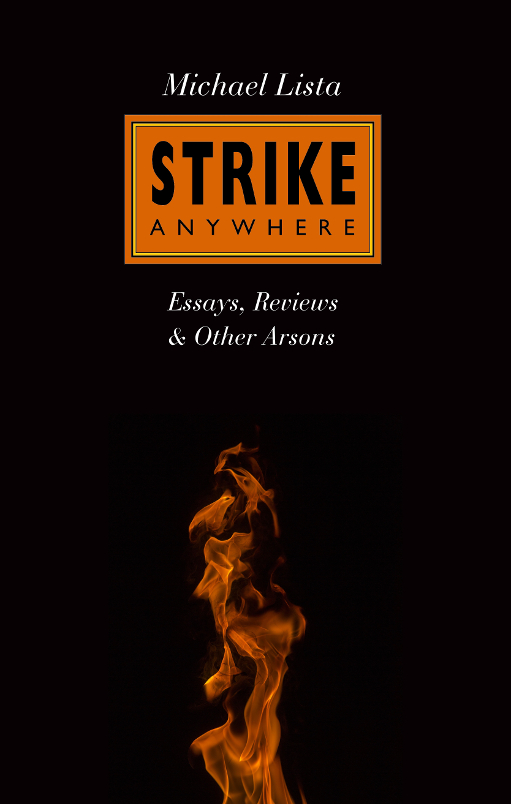 “[T]here’s an intrinsic value in discovering what writers think of each other’s work. The purpose of a review, good or bad, is to begin a conversation, not to end it,”  writes Michael Lista in Strike Anywhere, a collection of his reviews. Poet and former poetry editor for The Walrus, Lista’s notoriety for polarization explains the title. “Because Canadian literary types are as self-righteous as they are thin-skinned, the backlash to my criticism became more histrionic and panicked with each review I filed.”

The funny thing is that, to me, he actually seems open-minded, more prone to iconoclasm than panning a fledgling poet, and to evaluate writing positively or negatively based on what a work intends to say, rather than applying his own interpretation. Lista has a weak spot for formalism, and yet one of the more gushing reviews in the collection was of slam poet Alexandra Oliver. To be critical and to be prejudiced are sadly often conflated in our country.

As for his being too negative, why am I suddenly so invested in Canadian poetry? I filled the book’s dust cover with notes of the titles of poetry collections and criticism I’d now like to read thanks to Lista’s interpretations, his apt references to seminal works, and admired his knack for interesting phrasing as a poet writing about poetry. Until now, reviews about Canadian works in Canadian publications have rarely led to my buying a book; saying imprecise things in a positive tone fails to inspire as much as it doesn’t injure. The positive review conspiracy alienated me as a potential reader without my knowing it.

Good criticism has a poignant inflection of desperation that something important might be lost. “There’s a kind of Pascal’s Wager about [Stevie] Howell’s artistic skepticism; poetry may ultimately make nothing happen, but just to hedge your bets you might as well write as if it’ll change everything.” Here Lista wants to make sure you don’t miss Howell’s false modesty and thereby miss what’s so good about her poetry — and by extension Canadian poetry in general. (Norm Feliks)