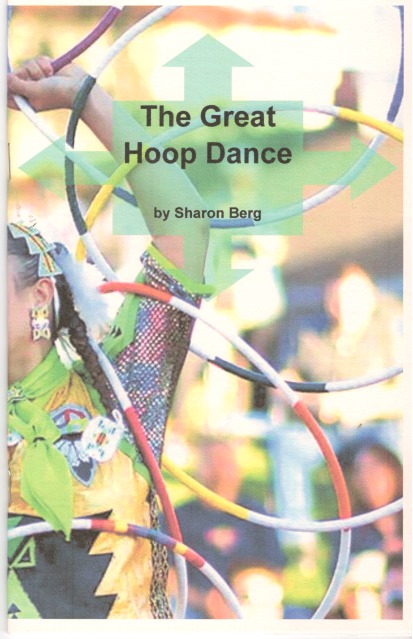 Sharon Berg’s private press, Big Pond Rumours, re-prints a poetic essay from 1988 which, in her own words, “is meant to interpret the teachings [she] received on First Nations Ontology from James Dumont,” a professor at Laurentian University. “The Great Hoop Dance” is less of an active interpretation than it is a poetic re-telling, and is as strong or weak as one would expect of a short poetry zine making this kind of attempt.
More of an educational text than a serious development or modern contextualization of mythic ontology, “The Great Hoop Dance” is framed for the settler-reader, as is evidenced in its introductory essay which variously offers the history of European settlers recording the Ojibwe creation-story from the biases of their own worldview, and somewhat contentiously, describes the European poets who took on the brunt of this task as “usually a marginalized human being [himself,] who lives on the perimeter of their own society, turning back to reflect upon the meaning of the human condition within that group” [5]. It is clear that Berg sees the eightfold “poetic essay” which follows as somehow engaging this history, though it is unclear from which standpoint, and to what intended effect.
The poems themselves are rather conservative. Confined to the rigid descriptions of Ojibwe belief-systems, Berg’s verse rarely extends beyond such iconography as “the Great Circle, | four seasons in their cycle, | blossoms, seed, snow cover and sprout, | wigwam, tipi, even the igloo | circling people with warmth” [22]. This is not to say the Berg’s treatment of the material does not demonstrate a degree of passion, but it is to say that it rarely plays with readerly expectations. (Joel W. Vaughan)