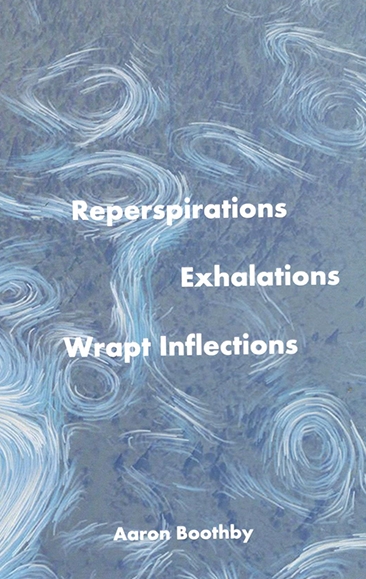 “The nearest sensation to working with language,” suggests Aaron Boothby on his website, “is a video of Andy Goldsworthy making sculptures with icicles. A long icicle from the overhang of a rock or of a tree that is broken into fragments.”

Boothby’s metaphor is a suitable descriptor for the poems in this collection. It’s as if they started as solid blocks of text and slowly had words chipped away from their sides and middles. What’s left, are phrases and half-completed thoughts, broken up by in-line white space.

It’s up to the reader, then, to fill in the blanks, and that’s half the time simple, and half the time impossible. Boothby’s writing is often lucid — “Sex is an approximation of consummation / a failure to ever fully inhabit another” — but it just as frequently devolves into seemingly disconnected scraps: “what could open you could / you open yourself?” No amount of re-reading will illuminate the meaning of some of this.

As a rule, though, the more times you comb over Boothby’s poems, the more sense they make. The prevailing theme here is intimacy — physical, mental, emotional. In “(Lips),” we get an in-depth examination of a mouth (and perhaps a kiss). In “(Fragrance),” and elsewhere, Boothby wrestles with his self-image (in an existential sense): “I can never see me from me.” It’s a personal affair, but inclusive; we’re seeing a murky world thorough Boothby’s eyes. (Scott Bryson)