How Could You Believe This Might All Be Made Right? 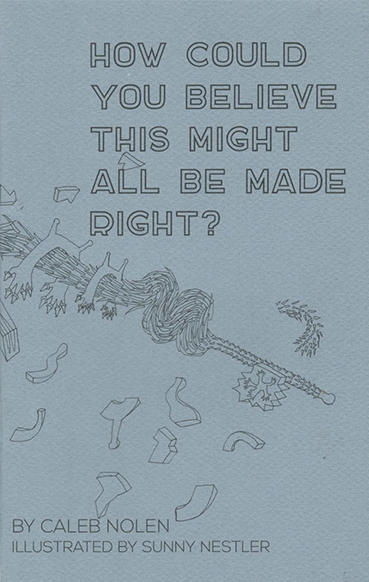 Caleb Nolen’s chapbook of poems immediately makes a good impression, neatly packaged on quality paper and complete with playful pen illustrations by Sunny Nestler. How Could You Believe This Might All Be Made Right? collects poems ranging from comedic to utterly absurd. As the title suggests, the situation is dire: life is a sequence of inconsequential occurrences and it’s recommended just to laugh about it for, not only is it improbable that the world could be straightened out, but one should disbelieve any possibility of improvement.

Poems don’t shy away from the grotesque. In “Dogs Shitting,” for example, Nolen shares: “At the end of 2013 scientists from Czech Republic / published a paper claiming that dogs prefer to shit / in a north-south orientation.” The author continues to describe his own bowel movements, climaxing with a scene of weight loss through excretion. In another poem, the speaker masturbates so consistently that his hand wrinkles from all the spit. Beyond the scatological references and bawdy jokes, however, lies a vulnerability akin to existential angst, a desire to take risks and experience life fully, yet being constantly sidetracked by trivialities into fearsome loneliness. “How much I wanted to love / someone, then, to show them a world that was my own,” the speaker laments. This sentiment, genuine as it may be, is tinged with the sadness of a solipsistic existence. It is one of Nolen’s strengths as a writer that he is able to articulate less savoury images in a lighthearted if mischievous array of poems featuring dolphins, blue jays and the moon. (Klara du Plessis)