The Idiot on Fire 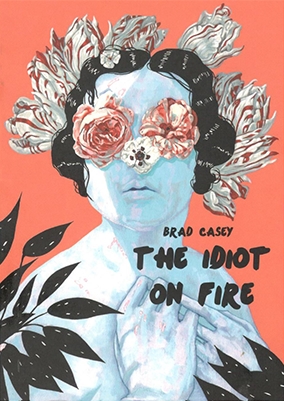 In keeping with Metatron’s standards, Brad Casey’s debut collection of poetry is a quick, honest, breath of fresh air. The Idiot on Fire is made up of six untitled poems (that is, unless one counts their dedications as titles—as might be implied by their bold, top-and- center prominence on the page) and is entirely composed in two-line utterances, never more than a few words at a time. Casey’s work here reads like a call and response game he plays with himself, and he’s able to use this listless-but- proceeding tone to forward some consistently entertaining introspection. Casey is at all times steeped in what he calls “the sads”—unironically, and un-melodramatically when placed in context—and he uses this same sense of melancholy to both metaphysical and comedic effect. Miniature stanzas like “We’re dogs | it’s a miracle we can talk” are interleaved with ones resembling “I read that we’re living | in a post-shrek- the-musical age”, and Casey’s ability to effortlessly strike this balance is what makes The Idiot on Fire worth returning to.

The chapbook’s rear description calls itself “an exploration of love in its many incarnations in a world of violence, distraction and inevitable disappointment”, but it would be more accurate to shrug off this implied sense of omniscience, and stress the reader’s static point of view behind Casey’s eyes. The Idiot on Fire is eternally second-guessing—attempting to apply reluctant-to- adapt frames of experience onto a world reluctant to sit still (see: “your breasts are | practical implications | of quantum | entanglement | maybe that’s sexist | idk | maybe i could have written that in the 60s | but your breasts | are your breasts | so | idk”. In doing so, Casey’s method depends on his reader’s shared experience of the contemporary West. Read this chapbook, then, before the moment passes. (Joel W. Vaughan)