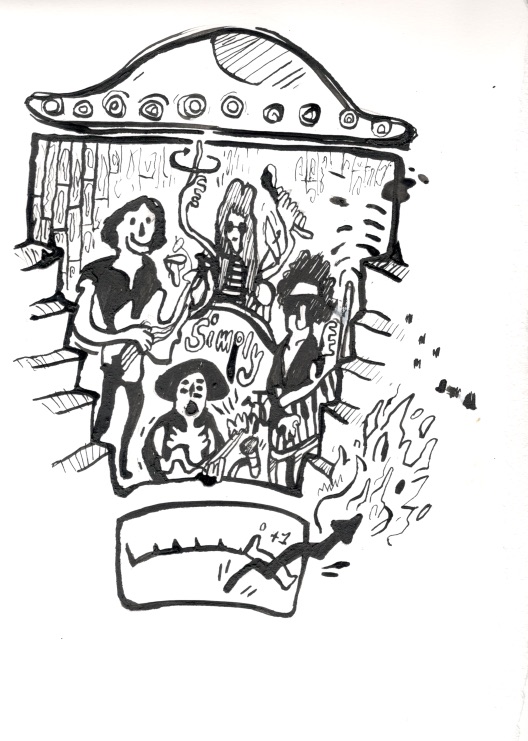 Broken Pencil is excited to share this exclusive excerpt!

Written by music journalist Jesse Locke (AUX, Weird Canada, drummer of many bands), Heavy Metalloid Music tells the story of the legendary (and underrated) Hamilton psych-punks Simply Saucer. This excerpt discusses how the band (young, scrappy and broke) collided with producer Bob Lanois in 1974 to record their seminal first album Cyborgs Revisited. The book is now in its 2nd edition with colour photos and a new epilogue. Buy it at Eternal Cavalier Press.

Coasting on the excitement of their bumpy test drive, the Saucer took its next flight less than a month later. July 14th and 15th, 1974 were booked for their first recording session at Master Sound Studio. This turned out to be a basement bunker in the Ancaster, Ontario home of brothers Bob and Daniel Lanois. Daniel’s story is, of course, enough for a tome of his own—he would go on to work with everyone from Brian Eno and U2 to Bob Dylan, Emmylou Harris, Willie Nelson, and Martha and the Muffins, not to mention a fantastic solo career. However, it was Bob who manned the boards for this particular session.

It’s safe to say that before the session started, the musical sensibilities of Lanois and Saucer emerged from entirely different worlds. At that time, the band members remained distrustful of anyone who wasn’t switched on to the heady sensibilities of their record collections. Case in point: the albums front man Edgar Breau brought as examples of the sounds he hoped to emulate were The Stooges’ Raw Power and the Velvet Underground’s White Light/White Heat. In turn, Lanois introduced them to his personal hero: Eagles producer Bill Szymczyk.

“I remember Bob being very serious and earnest,” says Breau. “I think we went in a bit—how should I put it?—suspicious. That was hilarious because we were so young, but we wanted to check everyone out back then to see if they were into hip music and the kinds of bands we were listening to. We just felt that if they were into cool music they would be great engineers or producers, which isn’t necessarily true.” Master Sound Studio’s client immediately prior to Simply Saucer was an environmental activist/children’s entertainer by the name of Raffi.

“Rick Bissell rang my doorbell one day,” remembers Lanois during an animated phone conversation. “He said, ‘Look, I’ve got some kids and I want to record them.’ So I said, ‘Okay, send them over!’ The band and I got together, and they played me a few things. They were really skinny. Each one weighed a hundred pounds or maybe a hundred and ten at the heaviest. I was an old guy at twenty-five then, and they were younger, maybe twenty. I thought, ‘That’s okay. I don’t care if they’re suspicious of me. I think I fucking like these kids!’”

Both the band and their would-be producer were incredibly green at this point, but everyone went in with excitement. These sessions were a raw, off the floor shamble with the only overdubs coming from DeMerchant’s tambourine and Breau’s instantly recognizable acoustic guitar on “Bullet Proof Nothing.” His semi-finalized lyrics (influenced by sci-fi, comic books, countercultural writers and first-hand experiences with the East Side street-life) were written in a Beat-style stream of unconsciousness shortly before stepping up to the mic.

The six songs that would end up filling out side one of Cyborgs Revisited are some of the most unhinged post-Velvets/pre-Voidoids proto-punk expressions ever laid to tape. These recordings initially intended as a demo burst from the seams with blitzkrieg guitars, submachine snare drums, and the electronic dreams of Simply Saucer’s own metal machine maniac. To bottle this lightning, Lanois remembers his strategy of feeding the hungry musicians and simply trying to stay one step ahead with his gear at the ready.

“It was live off the floor, and we just let it rip!” he exclaims. “When you’re twenty-five years old and you’ve basically been brought up in poverty, outside of the support of your mother, you don’t fuck around when someone you like comes by,” he continues. “I wasn’t messing around, even though those guys might have just been thinking this was a passing thing, recording what they thought of as a demo. That word’s not really used anymore, and I’ve always abhorred it, even when I was a kid. I wasn’t going to let those kids out of there until we came up with a fucking masterpiece, man.”