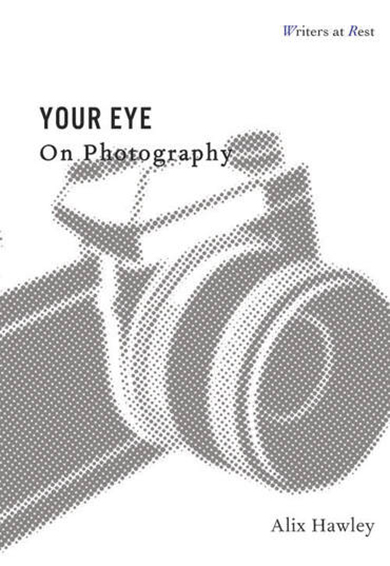 Your Eye: On Photography

Alix Hawley’s zine Your Eye is an essay on photography, the third installment of Alberta-based Woodbridge Farm Books’ series Writers at Rest, which engages writers on their hobbies and pastimes. It is printed on boutique, satisfyingly textured paper, bound with thread. It is primarily textual, but with a handful of black-and-white images from Hawley’s own Instagram feed. An accomplished writer, Hawley reveals the casual, but meaningful role photography has taken on in her life through a dance of memory-laden vignettes. Each starts with a line of thought. The first begins: “I was thinking about writing this essay, on photography.” Each then carries on to discuss subjects that don’t necessarily have to do with photography itself, but the fuzzy notion of the artist’s eye, its frame-making lens on the world of images. Unfolding like a thought journal, though not stream-of-consciousness, Hawley recounts memories in short, terse sentences, patiently circling the question of photography’s allure for her, and how her eye developed even before she became very active taking pictures. She remembers images taken in, without a camera, of tree bark, garbage, paintings hanging in portrait galleries. Her thoughts are mostly just thoughts, not conclusions. “I was thinking about…” she repeats over and over again, as though the zine is a retelling of how Hawley’s essay itself was written, rather than about its stated subject. Still, in this indirect, distanced kind of way, Hawley’s essay is an appealing look into an artist’s formation of their own gaze.