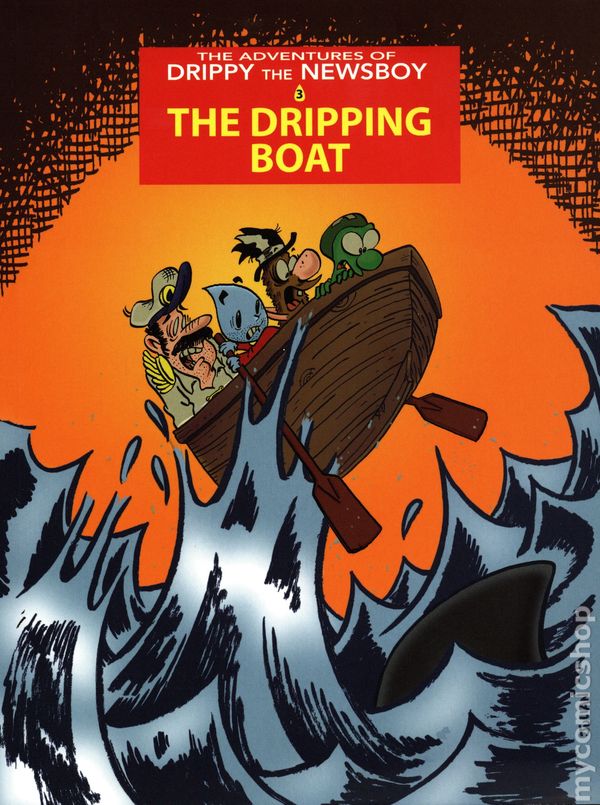 An odd little man with a water droplet for a head, Drippy the Newsboy started off as the mascot for The Drippy Gazette, an independent Vancouver newspaper focused on the arts. Though the paper was short-lived, Drippy himself made his way into a series of long-form adventures based on the works of author Stephen Crane. This collection, the third and final volume, adapts “The Open Boat,” a short autobiographical tale written by Crane in 1897.

Our story sees Drippy and three very unusual friends trapped at sea in a leaky lifeboat after their ship sinks. Thankfully, readers need not be familiar with either the original source material or Drippy’s previous books to understand this volume; beyond some references to unseen characters and places, the tale stands on its own.

While this book initially appears to be a light and silly fare, readers unfamiliar with Crane’s story will be in for a few shocks. Drippy’s constant repetition of, “if I am going to be drowned,” a line from the original material, is a reminder of the grim reality the characters face.

Art-wise, the designs bring to mind early ’90s cartoons, and even a bit of Disney influence.

I quite like how Drippy’s facial expressions switch between an innocent, wide-eyed look during his normal state, to a more realistic and masculine appearance while straining at the oars or yelling. Meanwhile, the volume’s black-and-white pages are full of motion; violent waves toss the boat and its passengers around as if they’re toys, and surreal oceanic dream sequences add a bit of psychedelic flair.

Overall, The Dripping Boat is an engaging, fast-paced survival story featuring a charming cast and a captivating mix of funny and somber moments, resembling a Saturday morning cartoon with an older audience in mind. Recommended reading!