Since The Atomic Elbow is so vast in its comprehension of wrestling topics, we sat down with editor Robert Newsome to discuss the zine, its lifespan, and wrestling in general.

What about wrestling do you think speaks to so many people?

Because of its simplicity. It’s the simplest thing in the world. There are some people, and those people are going to have a fight. It’s very easy to understand. But once you start looking at it more closely, more levels of complexity open up. It can be as simple, complicated, easy, or frustrating as you want it to be.

Twenty-nine issues is a big feat. How has Atomic Elbow changed over the 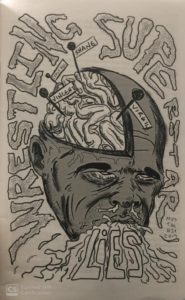 years? Where do you think it will go next?

I’ve probably moved away from writing about actual wrestling and done more of the trick where I pretend to be writing about wrestling, but use it as a jumping-off point to write about whatever I want. Wrestling is enough of a malleable topic that it can stretch out to cover pretty much whatever you want to write about. You just have to find a way.

Was there ever a particular submission to Atomic Elbow that really surprised you?

I’m honestly just shocked at the number of people who want to be a part of it. I’ve made actual real-world friends because of this thing and I’ve also been able to publish the work of people I admire and respect…people I never thought I’d be able to work with.

How has wrestling entertainment impacted your life?

I can’t remember a time when I wasn’t a fan of professional wrestling. My interest and engagement with it wax and wane, but it’s been a constant thing for me. So, it’s impacted my life by being a central part of it.

Can’t get enough of wrestling zines? You’re in luck – check out our feature by Amelia Ruthven-Nelson that reviews Atomic Elbow amidst other incredible wrestling zines!