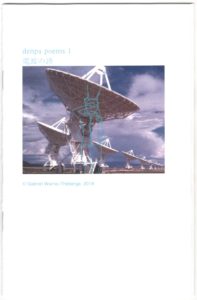 “Denpa” is a Japanese term for people who are disconnected from those around them, but Gabriel Wainio-Théberge seems to be presenting the opposite —perhaps a remedy: “I believe in stopping a school shooter by hugging them / and telling them ‘you are as beautiful as a tentacle monster.’”

It may be that the term denpa is meant to apply to the constitution of these poems, rather than their content. They read like collages of solitary lines— the rhythm works, but the context is missing. Insider terminology and references dominate, without a frame of reference (“pouty utopia in a single point /worthy of snow slime anointment”), but there are a few moments of lucidity that hint at something real behind the curtain, such as “I missed my best chance to behold a certain beautiful boy in my arms/ and kept feeling a coherent sadness until I became it.”

The best poems in this set are the shortest — just a few lines long. In these, Wainio-Théberge avoids the temptation to employ subterfuge and complicated connections. Though the longer pieces (half of this collection is taken up by a five-part long poem titled “VAMPIRES ARE REAL”) are difficult to penetrate, they do possess an alluring beat and the sort of verbosity that begs to be deciphered.