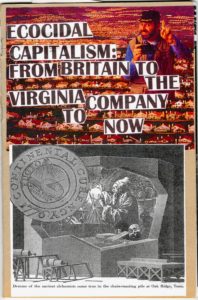 Ecocidal Capitalism: From Britain to the Virginia Company to Now

In the age of the nonstop news cycle, we sometimes lose a perspective of the specific (and sinister) historical mechanisms that underlie the challenges of today. In the case of this zine, that buried context is the practice of deforestation in 16th-century England and the colonialism that followed. Ecocidal Capitalism is unusual in that, rather than summarize the dozen or so texts that inform its content, they are instead quoted directly, without editorializing. It is only at the end that creator Will Dee provides a conclusion in his own voice. He is not interested in trees, per se. Rather, he separable in England’s reckless exploitation of its (and then others’) natural resources, and the pressure that present day climate change will eventually come to a head. In despair, he asks how far society has really come since the 16th century.

It was an effective rhetorical move to send a reader down a path of selected readings — cut and pasted over images of Ronald McDonald, Cold War era excess, and consumer products — and then confront them with the questions of our time. Unfortunately, I don’t have the answers, I left the zine feeling as anxious as ever about the future.

This is a classic style zine, cut and pasted by hand. The cover is peculiar. It seems to have been constructed out of repurposed, brown cardstock that was once spiral-bound with the cover images pasted and stapled directly on top.“Realistically, difference readers will draw different conclusions,” Will writes. “Or some may have thrown this in the trash before finishing it.” I’m glad he still felt it was worth the effort to tell this story from this unique perspective, despite his misgivings of how receptive the world may be to its message.