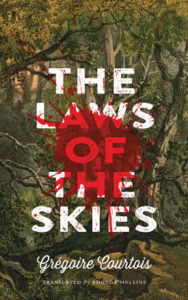 The Laws of the Skies

I suppose it is too easy to compare Grégoire Courtois’ The Laws of the Skies to Lord of the Flies, as translated by Rhonda Mullins. But let’s not avoid the obvious.

A class of six year olds and three adults head into the forest on a camping trip. Once the comfort of a supervising adult is dispatched, children are pitted against each other.

I’m convinced after reading the book— in moderate discomfort — that Courtois does not like children. It’s evident as a dozen primary schoolers are dropped into the literary equivalent of a transgressive horror flick.

The Winnie-the-Pooh and Blair Witch Project comparisons lazily coughed on to the book jacket feel like they were written by a marketing team who didn’t read the book. Very few connections can be drawn from the A.A. Milne series and the found-footage cinematic footnote.

The Laws of the Skies represents a loss of innocence and the fear of abandonment. To me, it’s a political parable of modern-day European politics told through a post-toddler lens. In the uncertainty of the European Union, fear is born. And children don’t know a lot, which allows the fear to fester and multiply.

As a father of a five year old, can I even trust these imps in the confines of a schoolyard, much less outside of it? Playground rules aside, Courtois details the demises of some children a little too intricately. A boy’s spine is snapped, and the imagery only rolls downhill from there. But perhaps this lends itself to the central focus of loss of innocence, and the permanence of that loss.

The book jacket may spoil the read by announcing that everyone dies, but part of the adventure, for any fan of horror, is finding out how. (Brian Baker)