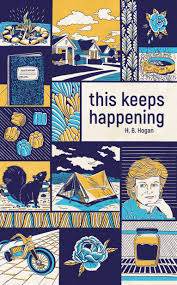 This debut collection of short stories features an impressively diverse cast of characters, but what unites them is their collective struggle to carve out a stable place for themselves in an alienating environment. Whether it’s a pair of high school dropouts, a recent immigrant to Canada forced to adjust his expectations, or a suburban husband experiencing a silent existential crisis, H.B. Hogan concerns herself with the inner monologues of the disconnected and dissociative.

Characters struggle through various types of limbo, either self-imposed or systemic. Some of their stories culminate in bursts of wilful action. Others persist in a state of seemingly constant motion, the consequences of which seem futile nonetheless, and return us to the same endpoint of existential stasis. Often, the stories are cut off just as the reader catches a glimpse of positive change or redemption, although utter destruction seems just as possible. Sometimes, the characters simply lie facedown in the grass, resigned to stay the course. In all cases, absurdity prevails.

One of Hogan’s strengths is her use of the short story form to explore potentiality, leaving her narratives open to seemingly infinite possibility. Whereas this could be unfulfilling in the wrong hands, Hogan casts her unfinished arcs deftly, which gives the writing a strong sense of humour and lasting power. Personally, “Corey Was A Danger Cat” was one of the funniest short pieces I’ve read in a while.

Torontonians will recognize several backdrops, caricatures and peccadilloes of life in the city, but the themes are universal enough to be appreciated equally by those outside the GTA. With things as they are in the world, Hogan’s nihilism should be able to resonate with anyone, after all.

This Keeps Happening is an impressive debut, one that will leave you laughing, cringing, looking off into space uncomfortably, then turning the page once again. (Ben O’Neil)