In the Spring of 2006, I was hired by AIDS Vancouver to coordinate a zine with male and trans spectrum sex workers in the Vancouver area. I hadn’t seen a sex worker-authored zine before, but, as a full-service sex worker during a largely pre-social media age, zines as communication immediately made sense to me. It had been nearly two decades since street-based sex workers were forcibly ejected from their long-standing hub in Vancouver’s gay village. Yet, the community remained dangerously fractured. There was an urgent need for fast and accessible ways to exchange information —there was a need for a zine.

The Boys ‘R’ Us Zine (BRU Zine) saw its first issue that fall, and continued strong for 10 issues, celebrating a final issue launch in2013. BRU Zine shared information directly related to outdoor hustles, like tips for safer sex and drug use, what to do when stopped by the cops, and where to find non-judgmental medical clinics. Other survival wisdom became equally important, like cheap recipes that can be cooked on a hot plate, and how to cope with bed bugs. 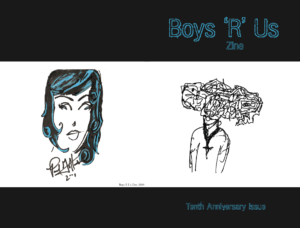 With each issue, the quantity of poetry and short, personal stories grew and grew. I remember nights sitting curbside with a bunch of the BRU zinesters verbally reciting our truths to each other, recording our voices on my iPhone 2G, and playing the recordings back to ourselves. This is how we edited — as experiential speakers and as listeners. It was transformative. Many of us had only ever told our stories under crisis-related circumstances, speaking to audiences of medical professionals, social workers, police officers, and lawyers. BRU Zine was by us, for us, so there was no need to fear the consequences of speaking up. There was no need to edit for an outsider’s perspective. The zine’s goal was never to educate others or explain ourselves. Rather, we wanted to share information solely with each other.

Whenever sex workers represent ourselves — from outing ourselves during a doctor’s appointment, to going public with our stories — we immediately become part of a much larger conversation that extends beyond our individual selves or any particular encounter. That broad conversation most often involves negotiating long-standing stigma, misinformation, and outright hostility. Through BRU Zine, I began to understand that by us, for us zines can act as a remedy for the antagonistic ways our identities and stories are treated in the mainstream. Zines offer a rare, even healing opportunity for sex workers to express ourselves inauthentic, community-informed ways.

“It’s powerful for sex workers who represent all different kinds of experiences and communities to come together and join forces. We demonstrate without question that a ‘sex worker’ is not any one kind of person coming from any one kind of background.” 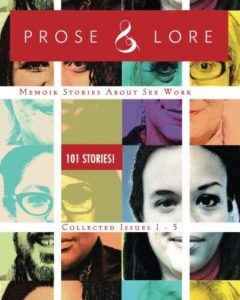 From 2013 to 2015, Prose & Lore provided a platform for exactly this kind of authentic, community-informed storytelling. The publication launched in 2013 after a group of New York City based sex workers gathered together weekly for peer-driven memoir writing workshops. Founder and editor Audacia Ray — also the editor of the long-running $pread Magazine—collaborated with guest mentors and writers that include AK Saini, Nahshon Dion, and Amiee Herman.

These ongoing workshops led to five issues, culminating in Prose & Lore Collected Issues 1 – 5: Memoir Stories About Sex Work. This final collection features more than 100 stories; each short memoir story is a new take on common themes of sex worker survival, lessons learned, friendships with coworkers, unpleasant bosses, bodily functions, and more. Stylistically, the collection ranges from prose poems to personal essays to humour writing, all affirming that sex workers’ stories are not as narrow or stereotypical as the media portrays. Rather, they comprise a rich literary movement with a diversity of authors.

AK Saini, a sex worker advocate and storyteller now based in Toronto, was a repeat contributor and writing mentor for all five issues. Reflecting Prose & Lore’s strong two years of work-shops and production, Saini says, “It’s powerful for sex workers who represent all different kinds of experiences and communities to come together and join forces. We demonstrate —without question — that a ‘sex worker’ is not any one kind of person coming from any one kind of background.” 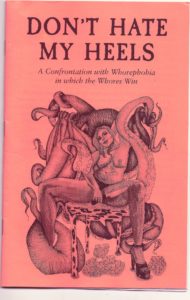 Similarly, the zine Sex Worker Wisdom arose from weekly writing meet-ups of Vancouver-based workers held at PACE Society, a sex work resource organization. The zine includes contributions from twenty-oneVancouver and Vancouver Island writers. Primarily a poetry chapbook, plus a few short personal narratives pieces, it is utterly unique. There is something special about poetry in its ability to be illustration by Reiko Rasch from Don’t Hate My Heels utterly uncensored and creative.

Of course, the vast majority of writing about sex work is found within institutional reports, with sex workers being one of the most researched populations in Canada. In other words, most writing about sex work has been (and remains) to incredibly invasive and dry. Taking this into account, sex worker poetry feels like the polar opposite of reporting. Again, if zines can act as a tool and a remedy for the antagonistic ways our stories are treated in the mainstream, then a poetry chapbook may truly be medicine. And these poems undoubtedly are curative inspiration. Cover to cover, Sex Worker Wisdom reveals dynamic poetic styles and themes that range from work and clients to spirituality and healing.

Justin Ducharme, a filmmaker, Métis dancer and choreographer, saw his first sex work-themed poem published in Sex Worker Wisdom.“I felt more comfortable and inclined, because people who needed to read my writing would have direct access to it, considering Sex Worker Wisdom was very much a community project,” says Ducharme.“There was a sense that the writing was being held closer. There was an extra level of care that made me feel confident that my words were being represented how I wanted them to be.”

That care is crucial for sex workers negotiating our intersecting experiences. Workers who have survived sexual abuse or assault face a complex double stigma, dichotomically labelled as the either the “happy hooker” or a victim, as empowered or abused. The zine mine to define offers space for survivors to be their multi-faceted and healing selves. The first issue includes stories, short essays, and testimonies, as well as a collaboratively-authored open letter to Amnesty International about their highly-debated policy on sex work. 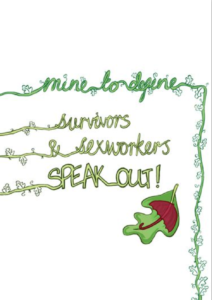 In line with a community-informed, by us, for us approach, mine to define zine launched at a Sex Work conference in London, UK, in 2015. The launch included a survivor’s healing workshop, which quickly filled the room. Co-editor Princess describes the launch and accompanying workshop as “an outpouring of people expressing that the wanted to share their stories. We had people wanting to submit their stories to any future zines, that [surviving abuse] is some-thing they’d wanted to talk about for a long time.”

Princess, and the mine to define collaborators, immediately understood the strong desire for their zine and began planning issue two, which launched in May 2019. “The zine format means authoring your own narrative,” says Princess. “You get to be the authority on your own life, and although it can be quite trigger-ing to write about the trauma and violence one’s experienced, it can also feel so therapeutic and empowering to break the silence and tell your truth.”

The vital need for sex worker zines that I came to understand in 2006 is as pressing now as it was then. Zines provide a unique by us, for us forum to speak truth to power, to disrupt stigmas and stereotypes, to make space and to encourage healing. And zines will continue to emerge whenever sex workers gather — whether we do so around tables or in the streets, online or at conferences.