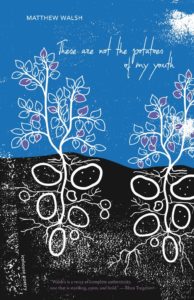 These are not the potatoes of my youth

Etched in white on a slate of black and blue, the potato flowers on the cover of Matthew Walsh’s debut poetry collection are resplendent, but it is the dark soil beneath that draws the eye. Likewise, the poems within These are not the potatoes of my youth delve into the hidden roots of identity and steadily expose the dense and unpredictable pro-cess of growing up queer in the Maritimes. Walsh’s poetry weaves readers through a fibrous road map of Canadian landmarks, from the Prairies to the Atlantic.

In the hands (or words) of someone else, any juxtaposition between photo-synthesis and Hal-Con, Halifax’s comic convention, would be jarring, but Walsh connects natural phenomena and consumerist rituals with flair and ease, demonstrating that Gatorade and Grindr are also part of the contemporary Canadian landscape. Lines hang in a delicate balance, eventually spilling over onto one another, but not before the gaps between them tease multiple meanings. “My father comes from people who learned to talk / the potato into growing more potatoes,” Walsh writes. Suggestive pauses and double entendres— “whippoorwill” seamlessly becomes “whip or will” — instantly hook you in.

The writing is simultaneously candid and witty, uplifted by an intangible dreaminess. But Walsh isn’t afraid to get down in the dirt — the collection’s latter poems uncover the “dirt” on several family relations. And as you burrow deeper into Walsh’s childhood, you hit on a core of memories hardened by age but still tender to the touch. Their words become increasingly pained, yet the poems never turn bitter. Instead they remain bittersweet, like the black-berries smooshed on the sidewalk in“Purple haze.” Just as the speaker wants to “climb down through” those ripe stains, you’ll want to descend through these poems again and again, and dig your way through the rich depths of Walsh’s labour.