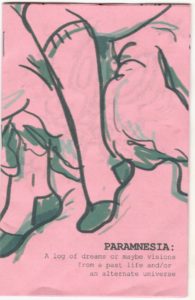 You know that glazed over feeling when, for a moment, you pop out of a dream and back into the real world, before you realize the real world is still real? It can be disconcerting, to say the least. You’re dangling there over the oblivion between your awake self and some utter chaos that your brain has invented while you weren’t paying attention. Finally, you snap back into your proper wits and remember who you are. Maybe you’re relieved. Or maybe you’re disappointed.

Buizon explores one side of this liminal fogginess in Paramnesia. Subtitled “a log of dreams or maybe visions from a past life and/or alternate universe,” you know from the start that you’re in for some somnambulatory adventure. Buizon’s caveat is that these “cringey” dreams were logged at age 17. But don’t be deterred. Buizon is just being too hard on herself.

Delivered in paragraphs of tiny font on pale pink paper, Buizon’s dreams are accompanied by luscious, heavy-lined illustrations. They depict scenes from the dreams: scissors shearing a pig tail, a drowning duckling, the evil dark eyes of a nemesis. The dream narratives all kind of run together and, being weird (as dreams are), it’s not easy to tell where one stops and another begins. Nothing too salacious happens, though. It’s mostly just a lot of weird imagery, rich with symbolism to analyze.What does it mean when you dream about dropping a hamburger while running down the street? If you know, I’ll bet Buizon would love to hear from you. Aspiring analysts and fellow dreamers, pick this one up.