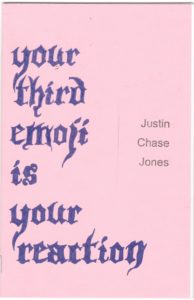 your third emoji is your reaction

This is a portrait of a life in disarray, but one in which the protagonist is aware of their shortcomings. “The first thing I did when I got home…was some hard drugs/ ugh what a fucking cliché,” writes Justin Chase Jones. There’s a lot to unpack in these poems: references to gender identity (“I am not male despite my presentation”) arise repeatedly, and a great deal of honesty prevails: “The day Steve Jobs died / I called the distress line/ the two events were unrelated / I just really wanted to die.”

Jones clearly has a way with words. This collection reads as though it was built on the fly, but you can see on close examination that considerable thought went into word selection and structure. Seemingly simple declarations possess internal melody. Pop-cultural references keep the mood somewhat light, despite a hum of chaos. Macaulay Culkin and Jordan Peterson get name-dropped in the same poem. There’s even a nod to the Mandela Effect.

These passages flow so smoothly at times that they might sound better being rapped or ranted live. Top marks go to the lengthy “Release Me From My Childhood,” in which Jones succinctly recounts an entire upbringing, from age 10 to the end of high school, to the beat of global events.