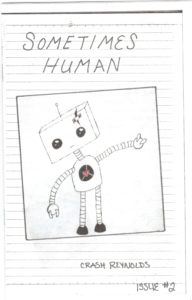 To be “sometimes human” — it’s an admirable goal. Sometimes human, sometimes cold and distant, and almost always over-whelmed. The second issue of this perzine is about coping with mental illness, documenting feelings of uncertainty and emotional stagnation.

It’s not an arthouse memoir, nor a portrait of the artist perzine that’s been cloaked in layers of abstraction. Instead, Crash Reynolds prioritizes the emotional over the purely aesthetic. What results from this prioritization is an engaging work that reveals its insecurities in earnest through personal observations, notes, and random thoughts.

Reynolds writes, “Dear reader, I feel all my chances changing. In a way I can not properly explain. Uncertainty but not fear. The step in between not believing in myself and trying to figure out how to process. And I guess that’s something.” Sure, the reader is addressed here, but there’s something about the way this zine is presented that makes you feel like an unwanted observer. Maybe it’s the handwriting. Maybe it’s the random doodles. Or maybe it’s the lined diary pages. Reynolds continues to speak about panic attacks and “stupid illogical mental fucking illness trying to win.” There’s a hand-drawn panic button, but it’s not your place to push it. You don’t have that control. How do you cope when you feel powerless? Different personalities cope in different ways. Reynolds adds that bystanders will always offer their patronizing two cents. They say,“Calm down, it’s no big deal. Don’t worry so much. It doesn’t matter.” To which Reynolds responds, “Screw everyone who tells me to calm down. I am trying my best!” There aren’t any concrete answers or neat check-lists of coping strategies in this zine. The reader, much like the author, is left uncertain and uncomfortable.

As a reviewer, this is one of those zines that almost makes you feel bad for evaluating, because it feels like you’re prying apart the author’s vulnerabilities. After all, the reviewer will forever be an unwanted bystander. On the other hand, it’s a nice reminder that art, no matter how creative, is emotional at its core —and reviews should respect that emotional core. Yes, even reviewers are sometimes human. So, I’ll sign off on this one, echoing an important message from the author: “Your feelings are valid.”