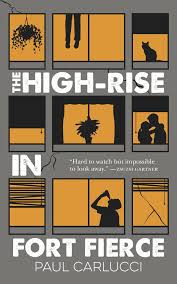 The High-Rise in Fort Fierce

Shortly after winning the Danuta Gleed Award for his debut collection, The Secret Life of Fission, Paul Carlucci spoke to the Ottawa Citizen. “I’ve tried writing novels, but I get bored,” he quipped. But he also mentioned another manuscript of short stories he was shopping around, calling it the closest thing to a novel he’s written. Now, this series of interlaced stories documenting a 16-floor apartment building in the Northwest Territories, are made available in The High-Rise in Fort Fierce.

High-Rise in Fort Fierce, near-novel or not, certainly isn’t boring. But it doesn’t follow through on its promise either— not entirely.

The set-up is a high-rise apartment building called Franklin Place, a doomed postwar relic that’s fallen on hard times, with rot in the walls and riff-raff on its lower floors. An inukshuk on the out-skirts of town, which may or may not have significance to the local Dene people, has been painted black, possibly signalling that the land beyond this point is barren and hostile. That’s how Carlucci lays it out — tainted, uncertain and bleak— and he never really lets the torque off the thumb screws. The voice is pure, an ironic noir tone that treats the body of a suicide jumper “like a sack of tomato juice and raw chicken,” or describes a bunch of bubble wrap as “pretty fun” —until the bubbles are dead.

The stories unspool like desperate disaster films, as quirky characters face hopeless obstacles against backdrops of poverty and casual violence, and generally end up stuck like a toad in a jar in the middle of the river, water seeping in through the air holes meant to keep them alive. The strength of the collection is in its deep evocation of place and an abiding pathos. Its weakness is an occasional over-reliance on exposition. It’s a curious flaw for an author who claims that the novel form bores him, but it’s easy to to move past. In general, Carlucci’s prose is fierce and his storytelling unforgiving.