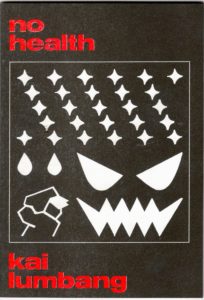 No health and Real Screamo are two short Risograph zines from Toronto’s Kai Lumbang, with Real Screamo being printed by Eli-Bonn Press in the Philippines. 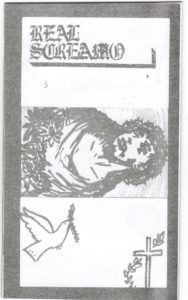 Thematically, the two zines pair well together, with both being somewhat sparse and, as described by Lumbang, “ambient.” No health contains four short comics, three of which are wordless, and are comprised almost entirely of the same repeated image. The third, “ambient comix,” consists almost entirely of just empty black panels. The only comic in the zine with any dialogue, “bike thief ‘18,” follows a robbery gone wrong, with only small, sparse, and static images conveying the action of the comic. There’s a stillness to things, and the comic is almost over before it began, being almost as ambient as the other three pieces in the zine.

Similarly, Real Screamo, Lumbang’s zine about “being haunted,” consists of wordless still-lives and scenes, the face of an almost Pokemon Red and Blue-esque ghost occasionally appearing to break things up. The zine moves through a house, then travels through the streets of San Fernando before arriving at a beach and returning home. The sparse greyscale images allow you to linger on them, trying to take in and identify what it is you’re seeing, almost as if the reader is being asked to stay and haunt the images themselves. Though the wordlessness of these two zines may seem as though there’s no reason not to rush through them Lumbang’s strong sense of image and mood invites you to linger.