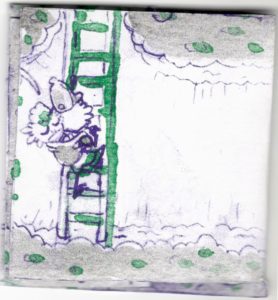 How could anyone grow up to do a thing like that?

This pint-sized comic literally unfolds before your eyes, back to front, untangled, unkept. It’s real and it’s ready. Bluntly speaking, this isn’t the easiest comic to unpack (literally), but that’s part of the exercise, and that’s part of what makes it so unique. Readers would be best advised to go with it, because the pay-off is therein the form of a cute story and slightly cuter drawings.

The zine starts at around the size of a matchbook, but it sequentially unfolds and the story falls out of it, feeling a little bit like a game of Snakes and Ladders as the character bobs and weaves from square to square. Funnily enough, the Snakes and Ladders analogy is literal, since some of the characters climb around on ladders, and a snake-type thing makes a semi-scary appearance.

It’s hard to get past the unique design when assessing this zine’s art and story, I’ll take a swing. This comic is a journey about overcoming obstacles in both the physical and mental world. There’s a family dynamic at play, with some loose commentary about parental relationships and the universal experiences of encountering and overcoming fear. It’s nothing revolutionary, but it is smart in its simplicity, and entire relatable on a few levels. That, paired with the squirrelly design makes this comic one worth picking up — extra gently.