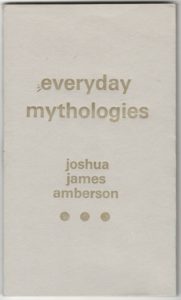 A collection of three retrospective narratives, this little book demonstrates a surprising liveliness and a smart production value. everyday mythologies packs an emotional punch. Never overly sentimental, Amberson is nevertheless able to conclude on grand observations which gesture toward a something learned, a something gained, without reducing his moral to a trite maxim.

His first story, “anything that can begathered”, explores a childhood-to-young-adult obsession with collecting. “At an early age I realized that objects had a life of their own,“ he remembers. “That the seemingly inanimate was alive.” The story, then, becomes a personal study of what it means to collect and how we relate to the living objects around us whilst coming of age. The collection’s second title, “a childhood in cars” takes a similar stance. Amberson’s protagonist remembers growing up through, beside, and around vehicles, mythologizing the car into a kind of interpretive key for his rural upbringing.

The final story is wider in its scope: “the giant with the walrus mustache” compiles the protagonist’s fragmented interactions with his estranged father throughout his life. Emotionally honest, resistant to played-out narratives, Amberson makes the confessional form sound easy. “For the next year or two, he sent a twenty-dollar check inside a Hallmark card on my birthday,” he writes. “That stopped, time passed. I hit the age he had been when I was born and an unexpected bitterness bloomed, lasted for a few years, before fading as unexpectedly as it arrived.” Not optimist, pessimist, nor nihilist, Amberson is perceptive, ready to make what sense can be made of the few scraps of frayed meaning we have access to, rifling through the past.