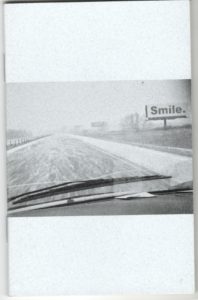 Sometimes these observations are direct, a bandmate selling flood-themed T-shirts to ironic Houston concert goers in the wake of Hurricane Harvey. At these moments Tour Book #2 shines with a sardonic observational tone cutting a line through the dull absurdity of a situation. At other times, events unfold at the edges of another’s story. A homeless man wanders through a protest about gun law reform, revealed in the entry date as  The March for Our Lives, following the Parkland school shooting. These experiments in form are never dull, but the further Nicholas Olson strays from his personal perspective, the more reaching the commentary becomes.

There is a flat sadness in Tour Book#2, the kind that comes from observing the structures of injustice and hypocrisy that surround us. This sentiment could come out as a whine, or as a scream, but here it’s an exhausted sigh. The best pieces phase between interior and exterior worlds. A stream of consciousness drifts between live hockey and an imagined reading of death threats lobbied at a black player in a predominantly white sport, the commercial-break proclaiming, “Hockey is for everyone”.