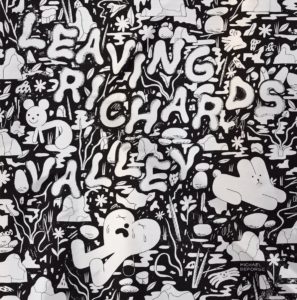 The world of comics has evolved far beyond the tradition of syndicated comic strips like Peanuts and Calvin and Hobbes. While newspapers still print serial strips, zines and small press releases are the preferred format for many of the medium’s current creators, and webcomics offer flexibility in format and tone for a somewhat geekier off-shoot of the boom in independent cartooning. But when experimental comics legend Michael Deforge began digitally releasing a mostly daily, mostly four-panel square comic in 2017, he chose to revisit the possibility of the serial comic strip. The result is an awesome exploration of the format, and a slight deviation from his normal aesthetics and themes, compiled here in the print collection from Koyama Press.

Leaving Richard’s Valley introduces the reader to a lovable band of oddly shaped animals who live and play in a closed parkland community under the direction of their sage and bossy leader, Richard. When our protagonists disobey Richard’s tightly held rules to help a friend in crisis, they are banished into the wild and uncaring streets of Toronto.

The strips are meandering and full of interludes and asides in a way that shows Deforge’s flexibility as he unravels, and perhaps imagines, the story bit by bit. Richard struggles to maintain peace in his small corner of the city, while the ousted animals engage in the cultural oddities of the city. While the cast’s grumpy, apathetic bro, a raccoon named Lyle, dives deep into noise music, other post-Valley critters find fame through unintentionally high-art urban sculpture, hand modelling, and the development of new community spaces such as housing in a hospitable public monument and a rival self-improvement cult.

Unlike so many of DeForge’s books, which normally build semi-familiar worlds with sometimes surreal logics, the backdrop of Toronto is a key player here. The artist plays with non-illustration images, dabbling in ceramics and overexposed photo backgrounds, some of which depict recognizable local sights. Appearances from the CBC, references to Rochdale College and the ceaseless force of gentrification all punctuate and shape the experiences of these animals as they negotiate the metropolis for the first time. In bringing the story close to home, Deforge’s always compelling cultural commentary becomes more pointed.

Deforge shows how our desires for belonging and validation play out through the often arbitrary and ludicrous machinations of power. City living alternately rewards and punishes the optimism of Omar, the friendly spider, and Ellie, the loyal and sincere squirrel. While Richard’s aspiring utopia fails to fulfill its promises after years of careful crafting, Lyle becomes a powerful cult leader both accidentally and unenthusiastically. Once Richard’s sycophant, Caroline the frog’s piles of trash become widely acclaimed postmodern design.

Leaving Richard’s Valley doesn’t offer any answers to the unpredictability and confused reasoning suffusing urban existence. Nor does it pander to nihilism. Indeed, despite the winding web of power and the realities of harm and helpless-ness, the book also offers models of friendship, collective action, and meaning making. In keeping with his avowed leftist politics and activist projects in and outside of comics, Deforge asks readers to approach the daunting systems of society with hopeful play and collaboration.