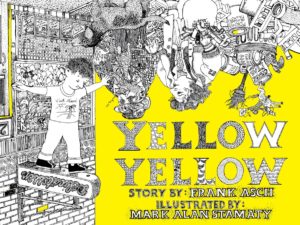 The narrator is a young boy who finds a yellow construction hat amidst a heap of rubble. The hat becomes his newest prized possession, and allows him to interact with the city and its inhabitants in a new way. Asch’s simplistic, yet endearing narrative, and Stamaty’s trademark crowded and comical illustrations, allow for a multi-faceted read. Although there are few words on the page, the surrounding gritty urban landscape comes alive with fantastical characters, strange storefronts, and countless objects coyly labelled.

This is a book that can be returned to again and again as a sort of eye spy. The immense detail makes it impossible to grasp in one pass. I found joy in the things I noticed, like the main character’s shirt changing from “Visit Miami” to “Visit Mommy.” With each discovery, I felt I was in on a little secret. But as a consequence, the main character’s yellow construction hat becomes the least exciting thing about this zany world. To adults, anyways.

This book fulfills the fantasies most kids have, such as freedom from parental guidance, ownership over an object, and a sense of belonging in a seemingly vast and alien world. Each character encountered has their trademark, whether it’s a footballer with military tanks as feet or a cowboy dragging a steampunk-esque metal bird. The narrator, too, finds his: the hat.

The simplicity of the story and the complexity of the surroundings creates an interesting contrast, allowing young readers to take part in a world they don’t fully understand yet — but one they can return to as they grow up.