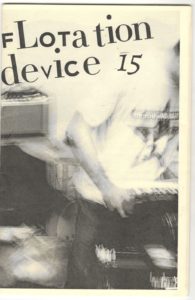 “Perfection grit. A loose concept. A collection of fragments. The crucible of pressing record. A train.”

Keith Helt inscribes visual and verbal collages in Flotation Device 15, following the creation of his second band through their performances around the greater Chicago area. Laid out like diary entries,Keith’s attention to tiny cracks of sensory experience create a narrative out of each load in, pre-show, red-boothed Chinese restaurant, and afternoon light that piques his attention. Though the majority of the texts track the movement of his band —finding a drummer, that drummer’s tardiness as he runs a drug errand prior to first practice, their first living room show debut— there are also moments of heightened consciousness turned inward.

Helt traces the movement of his psyche. He writes, “Losing my mind and my body in the car while my partner drives. Still unaware that these are panic attacks.” It is moments like this that make Flotation Device 15 so personable, that reach beyond the dynamism between a group of death disco musicians (though lord knows this is my shit). Helt’s psychic expansion crawls into the tiny moments before a set, while on stage, and the bit afterward, when he finds out who accidentally took the keys after the show ended.

Any regular to Helt’s WordPress would know the feedback shows are matched by noisy political sentience. “Anger towards capitalism. Cleanly.” This zine is multi-faceted in its commentary: every peg between performance, politics, and personal psychology is hit in fragments. A reflection, perhaps a manifesto for his approach, reads, “Mellow despair. Inevitability. Placebo voice. The failure of organization. Benice. Do nice things. Clang guitar.”