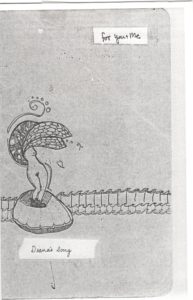 This short series of poems remembers, laments, celebrates the half-requited love of the protagonist’s adolescence. Diana grew up in a community where lesbian romance was an unexpected, ill-under-stood affair. This little zine pokes in at the ups and downs of her relationship with Anne Shirley (the Anne Shirley)—a childhood friendship which bloomed, transformed, and faded away like the seasons through which it progressed. The narrative is an ever-familiar suburban tragedy — sentimental, melancholy, a first love after which she will forever pine.

It’s an enjoyable read. The zine itself is a black and white photocopied collage of cut-outs and miscellany (flowers, sea-shells, doodles, lace). Bader-Shamai intersperses her poems with dictionary definitions, relishing in wordplay and meaningful double-entendres, like “be”,“airy”, “bury”, and “berry,” or “bosom- 1.The breast, of a person 2. as considered as the centre of feeling and emotion.”

The Green Gables intertext is a little perplexing, and Diana’s narrative voice —usually strong in the dismount — can sometimes botch the landing. “I’ve never met anyone so excited by ice cream,” she remembers. “[Anne] starts telling me the story of The Lady of Shallot, though I already know it (went through a Tenyson[sic] thing a couple of years ago).” At only four sheets folded folio, though, Diana’s Song is a quick, cute text. I’m glad I picked it up.