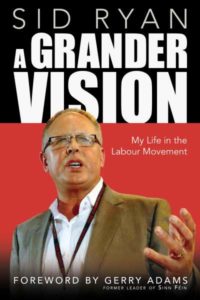 A Grander Vision, My Life in the Labour Movement

The central contention of former Ontario Federation of Labour leader Sid Ryan’s autobiography is that labour organization need to ally with social movements in order to succeed against the right.

The book begins with Ryan’s early life growing up poor in Ireland, leading to blue collar employment and eventually to his move to Canada. This is a typical trajectory for a labour leader: learning on the shop floor how management left unchecked has a power monopoly over the day-to-day treatment of workers and the terms and conditions of employment. Concerns about health and safety practices at the Bruce Heavy Water Plant onLake Huron led Ryan into union leadership , eventually leading CUPE Ontario then the OFL.

From here, Ryan offers an analysis of the Canadian labour movement from a personal perspective. Unions have eternally debated questions of democracy and centralism that mirror those in government and social movements, with the autocracy of the Teamsters’ notorious Jimmy Hoffa at one end, and consensus decision-making like the Occupy movement on the other.

Ryan discusses the divisions between unions and within the labour movement, admonishing several unions that refused to contribute money to the OFL during his tenure. Ryan chalks it up to petty personal vendettas. I found this flaw forgivable because the point of the book is that differences need to be set aside.

The “grander vision” Ryan promotes is something those of us interested in making meaningful change happen through social movement sought to consider. The right is united, whereas, because of its core values of celebrating and protecting diversity, the left is sometimes fractured. Since employers so often promote the causes of the right, the labour movement can be a crucial unifying force for the left.